The Mouthpiece: Dropping the quill, picking up the club—SC ruling may be bad news for legal iGaming

For every problem, as H.L. Mencken noted, someone proposes a solution: neat, plausible, and wrong. And the syndrome strikes again in the case of South Dakota v Mayfair, just decided by a 5 to 4 margin in the US Supreme Court. The question before the Court was essentially this: can a state charge state sales tax on a purchase made online from that state to a retailer located elsewhere, who then ships the purchase in? Up until now, the answer was mostly no. In the important 1992 case of Quill v North Dakota,1 the Court ruled that in order for state sales taxes to apply, that seller had to have a presence amounting to a “substantial nexus” with that state. This case was decided before the Internet came on the scene, but nevertheless meant  that thousands of small businesses could now cheaply and efficiently service a mail order market without the bother of keeping t rack of multiple tax codes.

When the Internet came along, the possibilities exploded. The pattern was explained in a 2006 book called “The Long Tail”. 2 If you want to open a business specializing in, let us say, buying and selling collectible stamps for the stamp-collector crowd, the old way of doing things dictated that you open up in or near a big city, a metropolitan population center. Because only a small percent of the population are dyed-in-the-wool stamp collectors that will pay $300 for a penny postage stamp from 1847 with Ben Franklin’s picture on it. So the bigger the population center, the better the chances that the area holds enough customers to keep your operation going. Otherwise, the entry costs- permits, licenses, ground rent, employee salaries, insurance, taxes, transportation- will prevent you from making a profit and drag your business under.

A mail order business helped, but could not eliminate, those costs. But an Internet presence, a website where customers could order and pay online, practically eliminated all but a small fraction of the usual overhead. As a result, thousands and thousands of new startups were launched , profitably serving all kinds of niche demands in a truly global market.

And of course, one of the biggest winners was iGaming. Notice I did not say Internet gambling, but gaming in general. To be sure, Internet gambling was first out of the gate, but gaming in general, that is, the playing of games that were not necessarily gambling, also took off. What had been boring tabletop sessions of cardboard counters and dice were expanded into digital dream worlds of knights in armor and dragons, space men and cowboys. Want to build your own world? They got that, too. In the days of paper counters and the box of Monopoly in mom’s bookcase, gaming in general was a market worth about a billion. Today’s digitized, multiplayer, online video gaming market is on track to top $18 billion this year, and $20 billion by 2020.

Of course gambling benefited also. Betting and gambling websites strove for better graphics and sound, the better to give the “look and feel” of an actual casino experience. And that worked even better, moneywise: this year, the total value of all forms of online gambling is about $550 billion, and this figure is predicted to go as high as $1 trillion by 2021.3

The states, of course, were very eager to get back into taxing this mix. To this end, they started peddling the narrative of the “mom-and-pop shop” forced out of business by mega retailers on the Internet. (President Trump has spoken on this position with especial fervor. It remains to be seen whether this is built on genuine concern for small players, or the fact that Amazon’s Jeff Bezos also owns the Washington Post, a resolute critic of this administration.) As with all political cover stories, it fails to cover a lot. For the startup and small business today almost certainly has and absolutely needs an Internet presence. Without a web page no one will know you’re there. Especially if you cater to a niche market, you depend on the reach of the Internet to be able to find enough customers. And far from mom-and-pop being driven under by the Internet, they have, to a large extent, adapted. Today there is hardly a pizza joint or grocery store without its own web page, even if it only does local deliveries (which are now much more efficient than phone orders).

But with the decision in Mayfair, protection against state taxes is now removed. If you sell to customers in Massachusetts, New York, Texas, and Wyoming, the transactions are subject to the state taxation schemes of each place. This is no problem at all to a corporation the size of the moon, like Amazon, which was already paying sales tax in about 45 states anyway, as a precaution. It is no particular burden to keep up with local laws and taxes anywhere when your company employs platoons of accountants and enough lawyers to form a softball league.

But what about the startup? What about the mom-and-pop operation that needs out- -of-state sales to make it? Can they afford accountants and lawyers enough to navigate Fifty States’ worth of taxes, fees, records that must be kept? As usual, the Grand Idea winds up handicapping and hurting the very people it’s supposed to ‘protect’.

And when we come to the peculiar Internet niche of online gambling, another consideration raises its head. As the greatest Supreme Court justice of all, John Marshall, once told us: “the power to tax is the power to destroy.”

Tax to the Future? 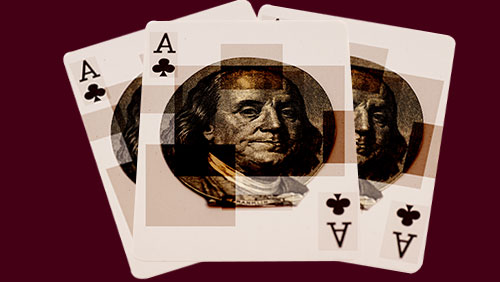 What does this promise for the future of Internet and interactive gambling? Gaming?

Gambling especially will be up for double jeopardy. Each transaction with a player in State X will be subject to sales tax, but also to whatever “sin tax” the authorities feel like adding on. (Whatever risk they may hold, the wages of sin are collected to the last penny by the powers that be. Always.) And of course, just because a gambling operation is licensed in one state doesn’t mean that it’s licensed in any other. That would lead to a requirement to exclude certain states and jurisdictions from the customer list- and right now that’s most of them, since only about three states licensed Internet gambling in any form. It might be possible for licensing states to agree to pool their customer base, as Nevada, New Jersey, and Delaware have done with Internet poker, and dozens of states have done with pari-mutuel horse betting.

But any way the game goes, the big players are now definitively favored, gaming or gambling. Only they have the resources to apply for licenses in multiple states, when it comes to that. Most little guys can’t afford a license in their home state. Only the big fish have the reach to lobby for interstate cooperation in betting pools.

Where does this leave tomorrow’s entrepreneur with a new idea for a gaming format? Largely, out in the cold. Few can attract the attention of the big corporations or the startup funding to finance a new idea. Indeed, in a controlled, corporate dominated environment, many of the advances and formats which are now familiar in iGaming and iGambling would probably not have come to pass in the first place.

Is there a solution? Unfortunately for the good guys, yes. Internet gambling began as a gray area, and the gray area is still there. Unless states move quickly to modify their newfound power, they may find that they have not killed the Golden Goose, but regulated and taxed him out of the territory. But this time it won’t be the goose that loses.