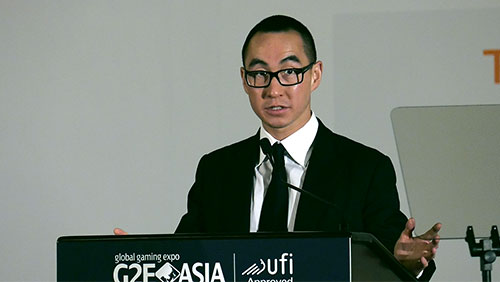 In this video, Melco Resorts & Entertainment CEO Lawrence Ho explains how shaking up business in Macau is beneficial to the casino operator’s Japanese aspirations.

After some delay, Melco Resorts & Entertainment finally rolled out the red carpet for its new flagship luxury hotel in Macau.

The Zada Hadid-designed Morpheus Hotel is indeed one of a kind and an iconic structure not only in Macau, but also across Asia. The building features the world’s first free-form high-rise exoskeleton, which reflects Hadid’s penchant for sweeping curves, strong lines, and sensuous aesthetics. Melco Resorts CEO Lawrence Ho said Morpheus was conceptualized in order to introduce the premium mass to amazing new experiences.

“I can see that Asian customers have Asian tastes—particular Asian taste. So, once the novelty of the Vegas experience had worn off, they’d be looking something unique that exceeded the experience of Asia today. Something that landed them fairly and squarely into the future. An Asian future,” Ho said in a keynote speech he delivered at G2E Asia. “Our philosophy has alwyas been that that we don’t want only to simply serve the people of what they like right now. We want to introduce them to awesome and amazing new experiences. And we exceeded them with our newest venture. It beats everything we’ve done before and that’s Morpheus.”

Ho also shared the casino operator’s plan to upgrade its flagship Macau integrated resort City of Dreams. Like Morpheus, Ho envisioned City of Dreams to be a go-to place not only for VIPs but also for premium mass guests.

To do that, Ho said they plan to reinvent retail by curating their own shopping environment for the first time. The reinvention of City of Dreams include the construction of “pop-up” retail space where some of the coolest retail brands will rotate, according to the executive.

“A totally different take on the current retail proposition. That’s why we are designing and running our own hotels and creating our own five-star brands. Pushing differentiation, giving everyone a five-star experience but offering distinctly different personalities and owning it,” Ho said.

All these changes in Melco properties are being made in preparation for the operator’s bid for a casino license in Japan, according to Ho. Just last week, the Japanese Diet‘s lower house passed the much anticipated Integrated Resorts (IR) Implementation Bill to the delight of many casino operators.

While waiting for Japan to invite casino license applications, Ho believes that it is in the best interest of the company to be able to attract premium mass Chinese to its gaming and entertainment facilities in Macau.

Ho noted that Japan welcomed 29 million visitors in 2017, a far-cry from the 33 million visitors to Macau alone. Ho believes that Japan, a country where necessary communications and infrastructure are ready in place, remains underutilized in tourism terms.

“And which tourists are knocking on Japan’s door? Yup, our premium mass Chinese—the curious culture and experience seekers,” he said. “China contributed almost 60 percent of Japan’s in-bound tourism growth over the last five years. And the numbers of Chinese outbound premium travelers are forecast to go from 64 million today to 120 million by 2025. Just in time for, hopefully, the opening of our first integrated resort in Japan.”