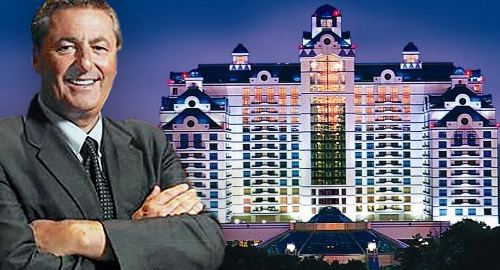 Felix Rappaport, president and CEO of Connecticut’s Foxwoods Resort Casino, was found dead at his residence in the resort on Monday.

The Mashantucket Pequot Tribal Nation (MPTN), which operates Foxwoods, said the cause of Rappaport’s death has yet to be determined, although foul play is not suspected. MPTN chairman Rodney Butler called Rappaport’s surprise death “a major loss” and extended sympathies to Rappaport’s family.

Rappaport (pictured) had been Foxwoods’ chief exec for over four years, while his gaming industry career spanned four decades. Rappaport previously served with MGM Resorts International for over two decades, overseeing many of the company’s properties in Las Vegas, and also did stints with Station Casinos and the Hershey Entertainment and Resort Company.

Rappaport’s death comes just as MPTN is finally proceeding with its plans to build a joint venture casino with Connecticut’s Mohegan tribe in East Windsor. The federal government’s Bureau of Indian Affairs (BIA) dropped its longstanding obstructionism of the Mohegans’ participation in the project at the start of June.

A similar notice regarding the Mashantucket Pequots’ involvement was expected to follow shortly after the Mohegans got their good news. However, the BIA has so far been curiously silent on the MPTN’s fate.

Whether or not the BIA follows through with its expected MPTN approval, Connecticut’s federal legislators continue to demand that the Interior Department’s inspector general follow through on its probe of the BIA’s unusual reluctance to approve the East Windsor joint venture within the stipulated timelines.

Last week, the tribes’ MMCT Venture LLC released new renderings of the project ahead of a public hearing by East Windsor’s planning and zone commission. The tribes also announced that, assuming local permission is granted, construction work on the $300M East Windsor casino would commence this fall with an eye towards opening the venue to the public in early 2020.