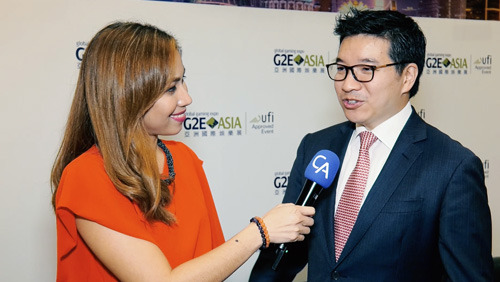 The Japanese Diet’s lower house is set to make a vote on the Integrated Resorts (IR) Implementation Bill on June 12. The vote was initially scheduled for earlier in June but lawmakers moved it on a later date to give way to Niigata gubernatorial elections.

Major casino operators have been jostling for pole position in the Japanese market, courting both local partners and venue hosts even before the IR Bill was submitted to the Diet in May.

“Japan has enormous opportunity and IRs can only be built upon it because the existing attraction has already brought appeal, whether it is cultural or the arts, as mentioned earlier, the shopping, the food,” Shen told CalvinAyre.com. “IRs add additional dimension both on the conference and convention side but also from a non-gaming, broad-based entertainment side.”

Gaming analysts estimate that the Japanese gambling market could be worth as much as $40 billion annually. Japan also welcomed a record 24 million tourists in 2017.

Japan is also seen as a more viable option for many casino operators affected by the Chinese government’s crackdown on corruption and currency outflows in recent years.

However, Japan might only issue two casino licenses after its broad regulatory framework is passed. Shen believes that Caesars may succeed in securing one of these licenses since it offers multi-faceted entertainment opportunities for guests around the world.

In Las Vegas, Caesars currently has nine integrated resorts, which offer a variety of shows, not only the so-called headliners but also magic shows and family friendly shows, according to Shen.

“Japan is one of the places where the theme parks are the most popular and the most successful in the world. So IRs, this location-based entertainment model that we have to offer, we believe, will be very successful there as well,” the Caesars executive said. “We have lots to offer on the F&B side, the food and beverage, restaurants with celebrity chefs, but also the shopping, and the spa, and the golf courses. So, that’s the type of thing we want to be able to bring to markets internationally as we expand.”

He also allayed fears of that opening casinos in Japan will be bad for the residents of the country, saying that integrated resorts bring huge value in terms of job creation, tourism attraction, tax benefits and investment.

“I think that story needs to get out there more. This is a real track record that we possess in this industry and as it relates to casinos itself, there’s actually decades of responsible gaming leadership that we have exhibited in each market that we operate in, where we try to do the right thing by our guests all the time,” Shen said. “These are the types of things that as we go through this processes I think, people would come to better understand with some more effort of course on the part of the industry but also on the part of the public leadership as well.”