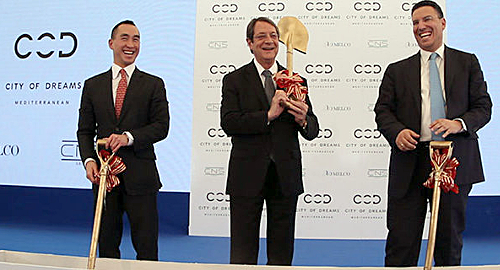 On Friday, Melco International Development execs, including CEO Lawrence Ho, assembled on a plot of land near Limassol in the Republic of Cyprus, for the ceremonial groundbreaking of City of Dreams Mediterranean. The €550m project’s first phase is scheduled to open by 2021.

Accompanying the Melco execs were Cypriot President Nicos Anastasiades and Melis Shiakolas, CEO of Melco’s local partner CNS Group. Ho said he was “honored and grateful for the trust the Cypriot government has placed’ in the “ambitious and exciting project.”

Ho told local media that the company has already hired 500 staff, of which 75% were local residents. Around 4k individuals will find work during the construction process, and around 2,500 will find permanent employment once the resort opens to the public.

Ho added that his company wouldn’t hesitate to acquire more of the surrounding land should he decide the resort needed more non-gaming amenities. In addition to a 7,500-square-meter gaming floor, the project will feature a 500-room five-star hotel, 9,600-square-meters of meetings, incentives, conference and exhibition space, plus 1,200-square-meters of retail shops.

The terms of Melco’s 30-year monopoly casino concession allow it to operate a temporary casino and three smaller slots halls while the main resort is under construction. Cypriot officials issued the necessary license for this temporary venue this week and Melco says this ‘pop up’ venue will open its doors on June 28.

The temporary Limassol casino will occupy a 4,600-square-meter space that used to be a supermarket, with a 1,300-square-meter gaming floor featuring 33 gaming tables and 242 slot machines. The venue will also host a separate VIP gaming area, along with a restaurant and two bars.

City of Dreams Mediterranean will be Europe’s largest gaming venue, at least, until Hard Rock International’s €2b Hard Rock Entertainment World project opens in Spain’s Catalan region in three years’ time. HRI and Melco were originally partners on both the Cyprus and Spanish projects, but the companies ultimately chose to pursue these projects on their own.