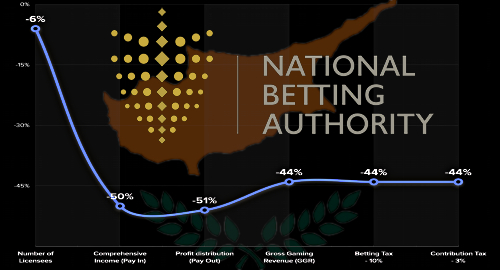 Cyprus-licensed bookmakers saw their betting handle cut in half in the second quarter of 2020 but online revenue rose as punters found themselves betting on unfamiliar sports.

Figures released this week by the Republic of Cyprus’ National Betting Authority (NBA) show locally licensed online and land-based bookmakers handled just €88.4m worth of wagers in the three months ending June 30, half the sum they handled in Q2 2019 and 53.4% worse than Q1 2020. Betting revenue slipped 44% year-on-year to €10.6m.

The figures look even worse compared to the final quarter of 2019, during which betting handle hit €215.5m and revenue totaled €27m, but that was a far simpler time when no one outside an infectious diseases lab had heard of something called a coronavirus.

COVID-19 forced the country’s six ‘Class A’ retail bookmakers to shut their doors from March 16 until May 23, and their numbers suffered accordingly. Retail handle totaled just €16.6m, down from €57m in Q2 2019, while revenue fell from €12.5m to less than €4m. Fortunately, the retail shops maintained Q1’s absurd 24% margin in Q2, which was six points higher year-on-year.

The nine ‘Class B’ online bookies kept their operations going during the pandemic but were left with a paucity of major sports to promote to customers. Online handle fell by one-third year-on-year to €65.2m but revenue actually improved 4.7% year-on-year to €6.6m as margins rose three points to 9%. All hail the punter confusion caused by Belarusian football and Russian ping-pong.

The retail shutdown resulted in the number of betting shops falling by 36 to 524 at the end of Q2, as operators made tough decisions regarding the viability of certain locations.

The pandemic didn’t deter the NBA from adding more internationally licensed online gambling sites to its blacklist. The NBA added 739 new domains in Q2, bringing the total naughty list to 12,563.