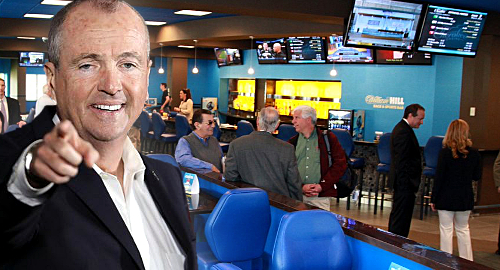 Legal sports betting in New Jersey is but the governor’s signature away from reality after state pols approved wagering legislation on Thursday.

The New Jersey Assembly and Senate each unanimously approved sports betting legislation on Thursday, setting up a wait-and-see game with Gov. Phil Murphy as to when he’ll affix his signature. Rumors have floated that Murphy (pictured) might use the betting bill as leverage in the larger fight over the state budget.

Murphy’s office issued a cryptic statement saying the governor “looks forward to closely reviewing” the wagering legislation, allegedly because he “wants to ensure that the proposed regulatory scheme is fair and reasonable.”

The pro sports leagues that lobbied unsuccessfully for the inclusion of an ‘integrity’ or ‘royalty’ fee in the legislation issued a statement Thursday urging Murphy to “fix” the legislation by including “basic protections to mitigate risks to the integrity of sports and to ensure fairness for New Jersey consumers.”

MONMOUTH PARK IN THE STARTER’S BLOCKS
Monmouth Park racetrack had been itching to start taking sports wagers at its William Hill-powered sportsbook within days of last month’s US Supreme Court ruling that struck down the federal betting ban. But the track reluctantly agreed to wait for Murphy to give wagering his official okay.

However, the Asbury Park Press reported that legislators had expunged language from the legislation that would have barred legal sports wagering at any entity that offered bets before the bill was officially signed into law. Meaning it’s now up to Monmouth Park to determine when it wants to start legal wagering.

Monmouth Park’s point man Dennis Drazin told the APP that “in my heart and mind, I think it would be the wrong thing” to start accepting bets “without the governor’s blessing.” Drazin hinted that this blessing need not come via Murphy signing the bill, but simply if the guv were to signal that he was “okay with your opening” on Friday.

Delaware beat New Jersey to the punch by taking the first single-game sports wager outside Nevada on Tuesday. ESPN later reported that the state’s three casino sportsbooks handled slightly over $322k worth of wagers on their first day.

NUGGET’S FERTITTA CATCHES A BREAK
Legislators tossed the Golden Nugget casino a bone before approving their bills, tweaking the clause that forbade any professional sports team owner from being involved in any wagering operation. The Nugget’s owner, Tilman Fertitta, also owns the NBA’s Houston Rockets.

The revised clause will allow casino operators that also hold a pro sports ownership stake to accept sports wagers on everything allowed at the state’s other sportsbooks except for those sports in which a stake is held. So the Nugget’s sportsbook won’t be allowed to accept action on NBA contests, which is a serious handicap, but better than no betting at all.

BETFAIR US INKS NJ, NY BETTING DEALS, BET365 LOBBIES UP
In related news, Betfair US, the American offshoot of UK-listed gambling operator Paddy Power Betfair, announced Thursday that it had reached a sports betting partnership with New Jersey’s Meadowlands Racetrack and also with the Tioga Downs casino in New York state. The agreements cover both retail and online/mobile wagering.

Betfair US boss Kip Levin told Legal Sports Report that the Meadowlands sportsbook could be up and running by mid-July. Betfair US recently struck a deal to add daily fantasy sports operator FanDuel to its brand portfolio, and Levin said Betfair would “very likely” use FanDuel as its primary sportsbook brand, keeping its existing TVG brand exclusively in the horserace wagering sector.

While the Meadowlands deal shoud bear immediate (more or less) fruit, the Tioga Downs pact is contingent on the state giving sports betting its legal okay. Legislators are rushing to get the job done before their current session concludes on June 20 but it’s anything but a sure thing.