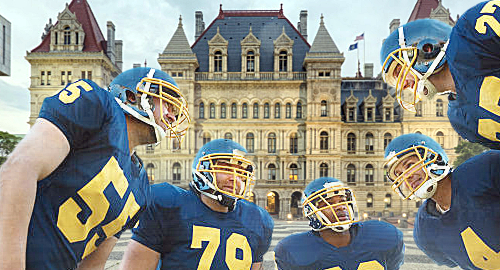 Autumn in New York would be even lovelier with legal sports betting, but the clock is ticking.

New York legislators are scrambling to approve a sports betting bill before their current session expires on June 20. Not much time, clearly, but New York always waits until the last minute to formally consider gaming-related issues.

New York pols were treated to a parade of sports betting advocates on Wednesday, including Major League Baseball lobbyists and former Yankees manager Joe Girardi, who told reporters that he’d urged legislators to “get something passed that protects the integrity of the game – this session.”

On Wednesday, Assemblyman Gary Pretlow introduced his version of the betting bill previously introduced by state Sen. John Bonacic, which includes a controversial cut of sports betting handle for the sports leagues on whose games New Yorkers will wager.

Both Bonacic and Pretlow believe there’s enough support in their respective chambers to pass a betting bill by June 20, although Assembly Speaker Carl Heastie sounded a more skeptical tone on Wednesday, saying he wasn’t “a big fan of gambling” and claiming that Assembly Democrats had yet to signal a consensus opinion.

PENNSYLVANIA PUBLISHES DRAFT SPORTS BETTING REGULATIONS
Just across the state line, the Pennsylvania Gaming Control Board (PGCB) released its temporary regulations governing land-based and online sports betting. The document (viewable here) is narrow in scope, essentially governing rules that the state’s 13 casino operators will have to follow if they wish to apply for sports betting licenses.

The PGCB wlll continue to work on its permanent betting regs over the next few months, but there’s no timetable for completion. The PGCB is scheduled to meet next on June 27 and again on July 18.

Earlier this month, spokesman Doug Harbach said the PGCB had its hands full preparing for the launch of intrastate online gambling and sports betting was just another element of the state’s massive gambling expansion.

Harbach reiterated that stance on Wednesday, saying the PGCB was more concerned with getting it right than getting it done quickly. However, Harbach told the Bucks County Courier Times that casino operators’ license applications could be approved before the final regs are in place.