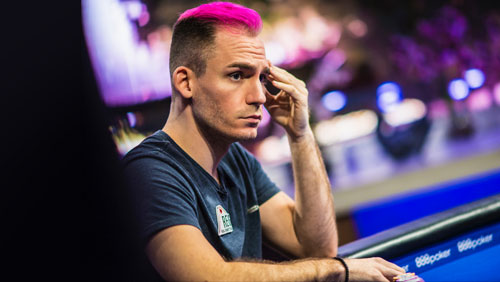 Day 2 of the Super High Roller Bowl comes to a close with Justin Bonomo leading 14 players, most of which are in the form of their lives.

The Super High Roller Bowl (SHRB) is in town.

Yesterday, I interrupted your day to tell you that Daniel Negreanu ended Day 1 with a Godzilla like chip lead, and today, I am about to tell you if Kid Poker maintained his chokehold as Day 2 wilted away.

The ARIA knew the sharks were heading to town, so they put on a show in the hope of attracting some chum. In the interim, the ARIA poker room governors and governesses have been so busy with the SHRB they have failed to update us on progress.

Ben Tollerene picked up a meatier looking $416,500 when he took down a 49-entrant event.

And then the big one.

Jason Koon returned from his $4m+ winning week at the Triton Poker Series in Montenegro to bag another million dollar score after chopping a 31-entrant, $100k buy-in event with Matthias Ebinger.

I think these results are significant because they show you where the form lies going into the final two days of SHRB action.

The defending champion, Christoph Vogelsang, made three of those four final tables, and he remains in the hunt for an incredible back-to-back win sitting fourth in chips.

GPI World #1, Chidwick, who won one of those four events, is currently sitting in second place, and nobody is in better form than Jason Koon. The West Virginia man sits in sixth.

Mikita Badziakouski won the HKD 1,000,000 No-Limit Hold’em Main Event for $2.5m in Montenegro, and he sits in seventh place.

It seems being a star of an SHRB TV show also helps boost morale. Seth Davies (3rd) and Daniel Negreanu (5th) both starred in the PokerGO exclusive Insiders, with the third band of that motley crew, Brandon Adams, crashing and burning in one of the final hands of Day 2.

The Poker Masters Champion Steffen Sontheimer is still in the mix, as is the former GPI #1 Nick Petrangelo, and there are few in better form than the current chip leader. Justin Bonomo took the lead after a massive flush over flush hand saw him eliminate Fedor Holz, and the American is currently on track to win back-to-back SHRB events after taking down the  China version for $4.8m.

The plan is to play down to a final table of six on Tuesday, with the final table ending on Wednesday.