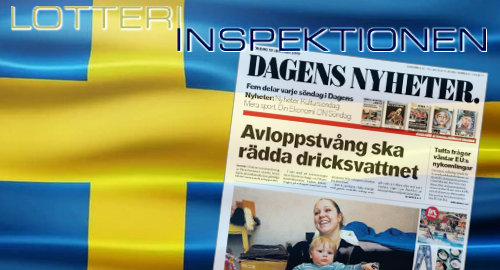 On May 18, the Lotteriinspektionen regulatory body issued warning notices to 39 online media operators regarding their use of clickable ads that direct customers to lottery operators based outside Sweden. The warnings pointed out that such activity was prohibited under section 38 of the Lottery Act.

The official notice specifically cited lottery operations but local media outlet Breakit, which published the list of the 39 naughty names who are potentially facing the regulator’s wrath, suggested the companies being promoted were actually internationally licensed online gambling operators, which are among Swedish media’s most active advertising clients.

Marcus Aronsson, who coordinates Lotteriinspektionen’s war on unauthorized gaming operators, told Breakit that the regulator’s goal was to force the media outlets “to comply with the law, which will put [the illegal advertisements] to an end.”

Sweden intends to liberalize its online market as of January 1, 2019, and international operators can begin applying for local licenses as of August 1. The new regime will allow locally licensed operators to advertise with local media but Aronsson insisted the current prosecution of illegal advertising “is important even if there is a new” regulatory structure in the works.

Aronsson said the average fine for profiting from illegal media was SEK100k (US$11,500), although higher fines were possible depending on the severity of the alleged infractions. However, media operators have the right to appeal any decision, which, by the time it’s resolved, could be rendered moot by the new regulatory scheme.

In response to the Swedish regulator’s ultimatum to the Metro newspaper last December, the Swedish Media Publishers’ Association accused the regulator of making “a threat to our democracy,” given that many media outlets relied on gambling advertising to “conduct independent journalistic work” that provided a net benefit to society as a whole.