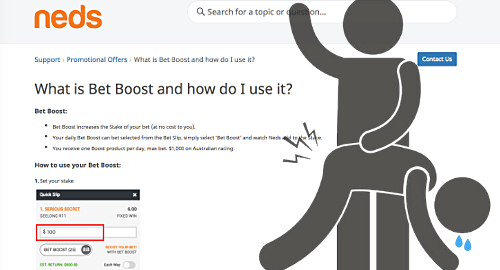 Australian online bookmaker Neds has been fined for being too aggressive in giving New South Wales’ punters the ‘come hither’ stare.

On Wednesday, Liquor and Gaming NSW deputy secretary Paul Newson announced that the regulator in Australia’s most populous state had slapped an A$18k (US$13,500) fine on Queensland-based bookie Neds for promotional material that broke NSW rules on ‘inducing’ its residents to gamble or open betting accounts.

Neds was dinged for five separate offences involving online advertising between October and December 2017. It’s worth noting that Neds only launched last September but has already had two of its television promos banned by the Australian Standards Bureau for promoting excessive gambling.

The NSW found fault with Neds’ offer to match first account deposits up to A$505 and for promoting ‘bet boosts’ that randomly raised a betting stake at no extra cost to the punter. Accepting the inevitable, Ned duly copped to having broken the rules and cut NSW a check.

Neds is hardly the first Aussie betting operator to have been penalized by NSW for similar inducement infractions. Ladbrokes Australia was penalized a total of A$85k in fines and court costs last April, possibly because it wasn’t the first time the operator had been dragged to the NSW woodshed. Bet365 and CrownBet have also been similarly sanctioned.

Newson warned other bookmakers that ignorance of the law was no excuse and the penalties for stepping outside the lines are about to get significantly more punitive. New laws are in the works that will increase fines tenfold, and gambling executives “can be held personally liable and criminally convicted … in cases where company directors have not taken reasonable steps to prevent offences.”

This really hasn’t been Neds’ year. The company had planned to launch a dedicated cryptocurrency betting platform, only to have its gaming regulator, the Northern Territory Racing Commission (NTRC), issue a cease-and-desist order. Neds switched to Plan B, which involved a proprietary crypto token it called Nedscoin, but the NTRC has yet to give the token its thumbs-up.