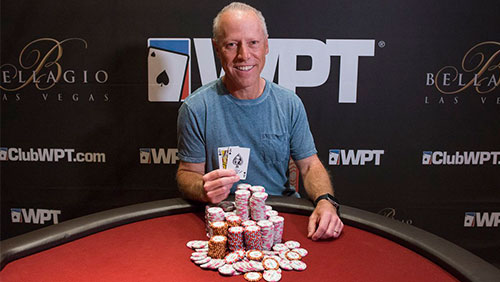 The World Poker Tour Elite Poker Championship needs to find a new square in the live tournament calendar or remove the word ‘Elite’ from the title after only 126 entrants ponied up the $10,400 entry fee in the inaugural event.

With PokerStars driving the European Poker Tour (EPT) around the racetrack in Monte Carlo, and partypoker moving like a madman in Montreal, it was asking a bit too much of the men and women with $10k to flick into a tournament to stay behind, even with a $25k High Roller all red and cherry like.

Alas, when you reach the finishing line first, you don’t care how many people entered. You won, simple as that. A WPT Champions Club berth is yours for life. A legacy encrusted in the Hendon Mob algorithms.

That’s how Larry Greenberg will feel this morning after winning the event. Greenberg went into the final table second in chips behind Ryan Van Sanford but ended up smashing it like kids on balloons.

Greenberg collected $378,879 of the $1.2m prize pool after only one hand of heads-up action against Danny Qutami. Greenberg waltzed into that duel with a 231 v 5 big blind chip lead after giving Jim Collopy a nasty case of sciatica, driving him into the rail in third.

The victory takes Greenberg’s total lifetime live earnings over the $1.5m mark. His most significant performance to date remains his tenth place finish in the 2013 $111,111 buy-in One Drop High Roller, earning $384,122.

And Greenberg is still on course for the Main Event/High Roller double. The newly crowned WPT Champions Club member is one of the 14-players left from a field of 43 entrants. Las Vegas legend, Tom Marchese leads the way; David Peters (who made the final table of EPT Monte Carlo) arrived in time to chip up, and the Women in Poker Hall of Fame’s (WiPHOF) recent recruit, Maria Ho, is also in with the gunslingers.

The trouble with hiring the top talent, is you have to work extra hard to keep hold of them.

Lynn Gilmartin is the top talent when it comes to anchoring poker on TV, but she is that way because of her insatiable drive to take action. Whether it’s taking the Integrative Nutrition course, founding Jooce Bars or winning Ladies poker events, Gilmartin is a winner.

We knew it was brewing after Gilmartin shared her experiences via Instagram during her time in Los Angeles working with Lilly Dawson and the team over at Hollywood Immersive.

It’s time to put all of that training into practice.

Gilmartin is currently starring in an indie film project called How do You Know Chris? The WPT host plays a fun time Irish girl called Dot who ends up in a party, not knowing anyone, trying to figure out who the host is. Steve O’Dwyer is helping her with the problem of developing an Irish accent.

According to PokerNews, Gilmartin has also featured in a Mexican road movie called Museo alongside Gael Garciá Bernal, where she played the role of Gemma. The movie won the Best Screenplay award at the Berlin Festival Awards earlier this year.