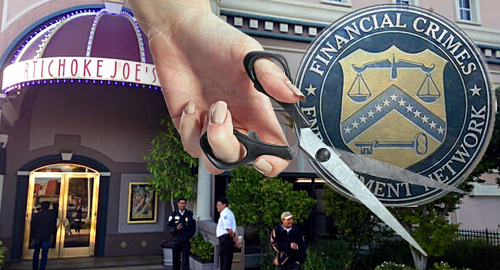 A California card room has caught a $3m break from federal watchdogs after promising to do a better job of observing anti-money laundering (AML) rules.

However, last week FinCEN announced it had settled and issued a new assessment against AJC that suspended $3m of that civil money penalty pending compliance with the undertakings stipulated in the assessment, including hiring a qualified independent consultant to review AJC’s AML program and submit written reports on said program’s adequacy.

AJC must also hire a qualified independent consultant to conduct a ‘look-back’ at all transactions in the years 2012-2014 to ensure whether any other dodgy dealings might have escaped FinCEN’s eagle eyes. A report on this look-back must be filed by December 31, 2018.

The AJC’s public shaming was the latest in a series of regulatory trips to the woodshed for California’s card rooms that resulted in seven-figure penalties for violations of the Bank Secrecy Act (BSA) and other shenanigans, including operating illegal sportsbooks.

TRIBES’ PATIENCE WITH REGULATORS RUNNING THIN
It’s been six whole months without another card room scandal, but the regulatory situation continues to irk the state’s tribal gaming operators, who have long argued that the card rooms’ expansion into games other than poker violates the tribes’ monopoly over slot machines and house-banked card games.

Chief among these transgressions are so-called ‘player-banked’ games, in which one player at the table acts as player-dealer for games like blackjack, effectively creating a situation in which the players are betting against the house, particularly when this dealer is a ‘third-party proposition player’ with seemingly unlimited funds at his or her disposal.

In 2016, the Bureau of Gambling Control (BGC) upheld the card rooms’ ability to offer player-banked games provided the player-dealer position rotated every 60 minutes. However, the penalty for failing to rotate was a mere two-minute suspension of play, after which the game could resume where it ended, a ‘penalty’ some tribes dismissed as a ‘potty break.’

In February, a meeting of the California Nations Indian Gaming Association (CNIGA) erupted in frustration over state regulators’ apparent unwillingness to rein in the card room industry, which has grown to 87 venues generating an estimated $1b in annual revenue.

Global Gaming Business Magazine quoted Rincon Band of Luiseño Indians chairman Bo Mazzetti saying it was “time to quit messing around with these guys,” referring to the BGC and its roughly equal counterpart, the California Gambling Control Commission (CGCC). Mazetti said the tribes needed to “get together, file a lawsuit and be done with it.”

Efforts are reportedly being made behind the scenes to achieve a legislative solution to the card room issue but many tribal leaders appear skeptical of any solution that would allow the card rooms to continue encroaching on tribal turf, making legal action appear all the more likely.