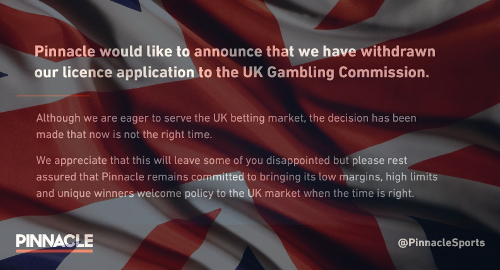 On Tuesday, Pinnacle’s official Twitter feed announced that the company had “withdrawn our license application to the UK Gambling Commission.” The company said that while it remained “eager to serve the UK betting market, the decision has been made that now is not the right time.”

The company went on to say that it recognized the disappointment it was bringing to potential UK customers but assured punters that “Pinnacle remains committed to bringing its low margins, high limits and unique winners welcome policy to the UK market when the time is right.”

Pinnacle’s UK license application had been listed as ‘pending’ on the UKGC website for some time now, and the specific cause for the delay remains unknown. The company had previously expressed optimism regarding a 2017 launch for its UK-facing site, but it now appears that Pinnacle didn’t expect any regulatory breakthroughs anytime soon.

Pinnacle (under its previous incarnation Pinnacle Sports) withdrew from the UK market in 2014, but assured its UK customers at the time that it would be back “should we obtain a British gambling license in the future.”

At the time of its UK withdrawal, the Curacao- and Malta-licensed Pinnacle had already submitted its license application to the UKGC. The following year, Pinnacle changed ownership, and the new team made “expansion into regulated territories” a key plank of its business strategy.

Pinnacle appears to have shifted its focus to its new B2B sportsbook platform technology division, Pinnacle Solution, which the company unveiled last week. The company reportedly hopes to be able to market Pinnacle Solution to US companies looking to take advantage of any favorable shift in America’s sports betting laws.