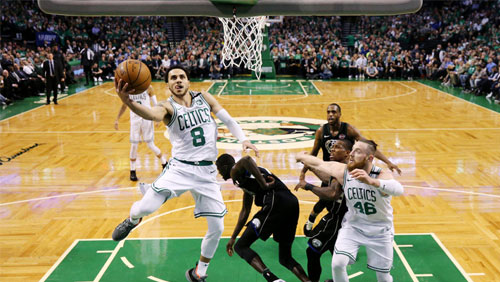 It’s an unusual Thursday night around the NBA playoffs because it’s the first time this postseason where there’s just one game: Boston Celtics at Milwaukee Bucks, Game 6 of their Eastern Conference first-round series. The Bucks are 5-point favorites.

Perhaps it’s not such a letdown with so little action because the first round of the NFL Draft is Thursday as well and that’s going to dwarf Celtics-Bucks in terms of TV ratings.

The Philadelphia 76ers, the East’s No. 3 seed, await the winner of this series. Philly closed out its first-round set in Game 5 against Miami on Tuesday night. Should second-seeded Boston win this one, the Celtics would host the 76ers in Game 1 of the conference semifinals likely either on Saturday or Sunday. Should the Bucks prevail, this series goes back to Boston for Game 7 on Saturday.

The home team is unbeaten in this series and Boston has covered four of the five. On Tuesday, the Celtics were -4.5 and won 92-87 – the lowest-scoring game of the series.

Boston got back its best perimeter defender and “energy guy” in guard Marcus Smart. He hadn’t played since March 11 due to a thumb injury and originally wasn’t expected back until Game 6 but finished with nine points, five rebounds, four assists and three blocks in 25 minutes. It’s not a coincidence that the Bucks scored their fewest points of the series by far.

Smart’s return and the decision of Celtics coach Brad Stevens to put rookie Semi Ojeleye in the starting lineup seemed to give Bucks superstar Giannis Antetokounmpo fits. He finished with just 16 points on 5-for-10 shooting – although he did add 10 rebounds and nine assists. Milwaukee won’t beat most teams with 16 points from the Greek Freak. Antetokounmpo vowed to come out more aggressive in Game 6.

Milwaukee is hoping for the return of starting center John Henson for Game 6. He was a factor the first two games, averaging 9.5 points, 6.0 rebounds and 3.5 blocks in 37 minutes, but has missed the past three with back soreness. In an elimination game, if he can walk he should play. Tyler Zeller, by comparison, started at center in Game 5 and had zero points and a minus-6 rating in 10 minutes.

Thursday also could be the last game the Bucks play in the Bradley Center as they will move to a new arena for next season. Boston has covered eight of its past 10 trips to Milwaukee.