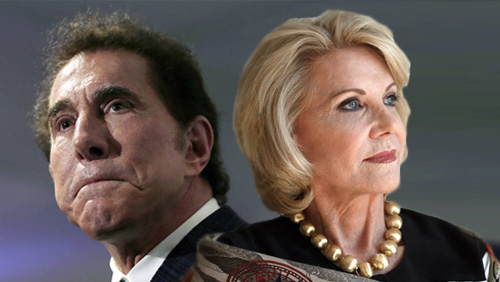 The former king of Las Vegas Steve Wynn and his ex-wife Elaine Wynn have finally decided to put an end to a bitter chapter of their lives.

Wynn Resorts Ltd. announced on Monday that its embattled former CEO has agreed to settle his ex-wife’s remaining legal claims and put all of the personal unpleasantness of the last few years behind them.

The “unpleasantness” that the casino operator was referring to was the 2010 stockholders’ agreement involving them and Aruze USA Inc. concerning the control of each party’s respective shares of Wynn Resorts.

It would be recalled that the controversial agreement barred any of the subscribers, including Wynn, Elaine Wynn, Wynn Resorts, and Aruze from selling their shares of Wynn Resorts without the consent of the other signatories.

Wynn Resorts noted that neither the company nor Sinatra made payments to Elaine Wynn under the agreed terms of the settlement. However, people familiar with the matter told the Wall Street Journal that Steve Wynn paid an undisclosed sum of money to his ex-wife.

“I am pleased this litigation has now been resolved,” Elaine Wynn said, according to the news outlet.

Wynn Resorts bid goodbye to its former CEO in February following news of his alleged sexual harrassment of his female employees. Steve Wynn recently disposed the rest of his stake in the company that he founded.

The casino operator wanted to settle all disputes so it can focus on mitigating the impact of the sexual misconduct scandal involving its founder.

In March, Wynn Resorts announced that it had settled a stock redemption dispute with Universal and its unit, Aruze USA Inc., which stemmed from former Universal boss Kazuo Okada’s ouster from Wynn Resorts in 2012. Wynn Resorts paid Universal a sum of $2.4 billion, which was lower than the market’s expectations.

Wynn Resorts also decided to bury the hatchet with Okada, dropping all legal claims it had filed against the businessman.

Okada, who invested $260 million when Wynn Resorts was still in its infancy, welcomed the legal developments in Nevada, saying that “the world knows what I have known all along—I am innocent.”