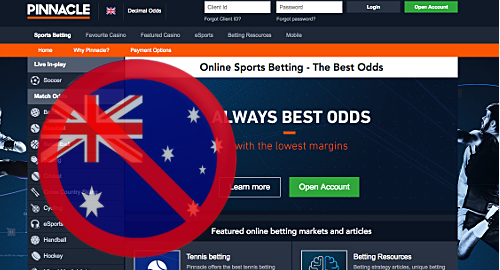 Online bookmakers Pinnacle have restricted Australian gamblers’ access to the site for as yet unexplained reasons.

On Monday, the Curacao- and Malta-licensed Pinnacle’s Australian customers reported receiving emails informing them that the company was “unable to offer services in your jurisdiction after March 12th, 2018.” Pinnacle apologized for the inconvenience, but offered no explanation for their decision.

Effective immediately, Pinnacle’s Australian punters have lost the ability to make new deposits or place new wagers. All pending wagers have been canceled and the stakes returned to customers’ accounts. The site has given its Aussie customers until April 20 to withdraw their funds.

Pinnacle lacks an Australian online sports betting license, as required by the amended Interactive Gambling Act. In February, the Australian Communications and Media Authority (ACMA) announced that it had identified 19 instances of internationally licensed online gambling operators that continued to serve local punters without an Australian license.

The ACMA said it had “successfully engaged” with the offending operators, and that “a number” of violators had agreed to cut off access to their Australian clients. The ACMA declined to identify any of these targeted operators by name.

Pinnacle has exited other newly regulated markets in recent years, including Poland, although in that case, the site exited the market before the new restrictions took effect. The Australian case differs in that the new rules took effect last year, leading many prominent operators to exit before the whip came down.

In 2014, the company changed ownership, and the new owners and CEO Paris Smith embarked on a strategy of targeting operations in regulated markets, at least, those where it found the regulatory and tax obligations palatable (unlike Poland and its 12% tax on online betting turnover).

Pinnacle has applied for a license from the UK Gambling Commission (UKGC), the results of which are still pending. The UKGC has of late adopted much stricter oversight of its online licensees, and Pinnacle appears to be taking no chances that its Australian operations might complicate its pursuit of lawful access to the UK market.