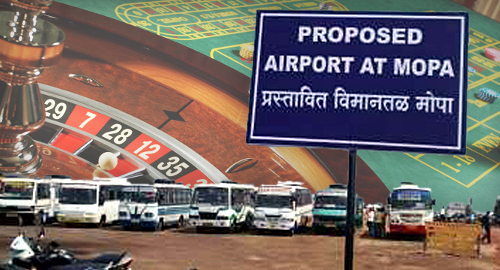 The Indian state of Goa is contemplating forcing its casino industry to relocate en masse to a new ‘entertainment zone’ planned for a local airport.

Last week, Goa’s Public Works minister Ramkrishna Dhavalikar informed the state legislature that the government planned to open a designated entertainment zone near the under-construction airport in the village of Mopa along the state’s northern border.

Goa’s six licensed shipboard casinos are floating on borrowed time, as the state government previously announced that the vessels will all have to move their gaming operations onshore by July 2020. The Mopa airport isn’t expected to open for business until 2020, and Dhavalikar didn’t specify whether the planned entertainment zone would open in advance of the airport.

Goa also has nine land-based gaming venues, most of which are based in luxury hotels and cater to tourists. However, Dhavalikar suggested that all Goa casinos – be they floating or land-based – could be relocated to the new Mopa entertainment zone.

Dhavalikar stressed that the government was still finalizing its draft casino policy, as evidenced by his suggestion that casinos can relocate to the Mopa zone “if they want.” Dhavalikar didn’t specify what options remained for casinos that might not want to relocate, although the revocation of their licenses appears to be the most likely result.

Meanwhile, there’s still no word on when the sixth floating casino will reappear on the Mandovi river. The MV Lucky 7, a shipboard casino operated by Golden Globe Hotels Pvt Ltd, ran aground last July on its maiden voyage to its planned mooring point.

Last December, Golden Globe announced that it would transfer its gaming operations to another ship, the MV San Domino, while its original vessel was undergoing repairs. But the planned launch date of mid-January came and went without anyone busting a bottle of champagne on the San Domino’s bow.

All of Goa’s floating casinos are facing a March 31 deadline to shift from the Mandovi to an alternate waterway, the identity of which is still very much up in the air. The government has been granting six-month extensions to this deadline for years, but perhaps the final location will be part of the state’s new casino policy.