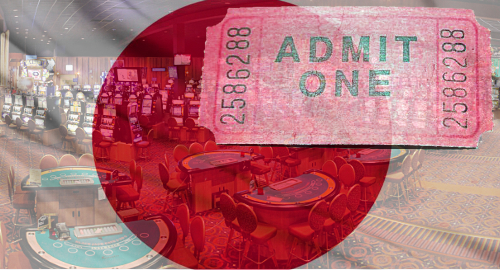 Japan has unveiled details of its plans to impose a casino entry fee that will apply not only to locals but to foreign residents as well.

On Wednesday, Japanese media reported that a task force overseeing the drafting of the Integrated Resorts (IR) Implementation Bill wants to impose a fee of ¥2k (US$18.50) on Japanese residents wishing to set foot on the gaming floor of the casinos Japan hopes to open five or six years from now.

The fee will be mandatory for all permanent residents of the country, be they citizens of Japan or some other nation. International tourists will be exempt from the fee and casinos will be prohibited from reimbursing gamblers for their fees paid.

The fee is intended to help fund problem gambling mitigation programs, and to monitor Japanese citizens’ casino activity. All local residents will be required to present their My Number identification card before setting foot on a casino floor.

The task force told the ruling Liberal Democratic Party (LDP) that it had attempted to strike a balance in arriving at the ¥2k figure, which it claimed was neither “dismissive” nor “outrageously high.”

But some LDP legislators reportedly expressed concern that the fee was insufficient to serve as a deterrent to problem gamblers, suggesting a fee of ¥10k would be more appropriate. A task force official said there was no hard evidence that higher entry fees were capable of deterring gambling addicts from pursuing their drug of choice.

A September 2017 survey found that, of respondents who expressed interest in visiting casinos, 81% would be willing to visit if the entry fee was ¥1k, while 49% would still go at a ¥2k entry point, but only 37.5% were still interested if they had to pay ¥3k.

Japan has modeled much of its casino regulatory scheme on Singapore’s integrated resort model, which imposes a S$100 ($76) fee on local residents who wish to gamble at the Marina Bay Sands or Resorts World Sentosa casinos.

This week has brought a flurry of details on Japan’s casino legislation, including a Singapore-style 15k-square-meter maximum gaming floor area, caps on the number of weekly and monthly casino visits for local residents and a proposed tax regime that starts off at 30% on the first ¥300b ($2.8b) of casino revenue, rising to 50% of revenue over ¥400b.