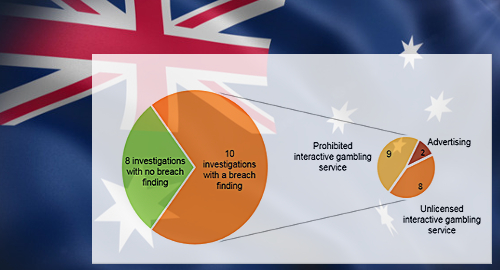 Australia’s online gambling watchdog has uncovered 19 breaches of that country‘s new gambling law in its first investigation since the new rules took effect.

Last week, the Australian Communications and Media Authority (ACMA) published its first report into suspected violations of the Interactive Gambling Act 2001, which was amended last year to ban credit betting, in-play sports betting and non-betting products such as online casino and poker.

The ACMA report covers the three-month period starting September 13, 2017, during which the regulator received 108 enquiries and complaints regarding suspected violations of the amended Act. Of these complaints, 38 were found to be valid and led the ACMA to launch 18 separate investigations.

The ACMA doesn’t publish the names of the companies it investigates, but did say the investigations involved a total of 65 distinct URLs. The ACMA said it had “successfully engaged” with the naughty providers, and “a number” of these services restricted access to Australian punters following this engagement.

Some of the affected companies almost certainly were offering online poker products to Australians, which remains popular despite the ban. Some Australian legislators have claimed to be close to convincing the government that online poker should be included in the list of acceptable online activities but tangible progress has so far proved elusive.

The ACMA was given new powers under the amended Act, including the right to apply to the Federal Court to impose civil penalty orders and injunctions against lawbreakers. The ACMA also has the authority to contact gambling regulators in other jurisdictions if one of their licensees is in violation of Aussie law.

The new ban on credit betting took effect on February 17, although telephone betting services with annual turnover of less than A$30m and an on-course Aussie racetrack presence were granted a carveout.