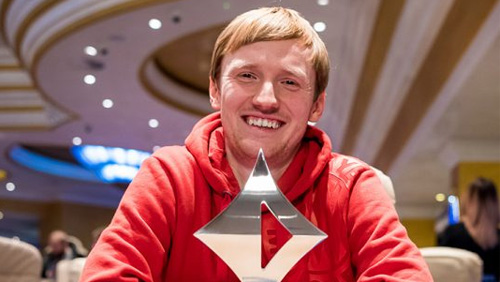 When I saw the name “Becker” alongside “€25k Win” in my Google Alerts, I hoped partypoker were going to take care of the trophy given Boris’s habit of losing them.

But it wasn’t Boris.

The second €25k buy-in Super High Roller at partypoker’s MILLIONS Germany saw 45 entrants, six fewer than entered the first time around when Patrik Antonius took the first prize of €425,000 (Antonius was one of six people who fired two blanks into this one).

The players turned poker police when the six members of the final tabled unanimously voted to end the tournament on Day 1, instead of returning for a scheduled Day 2 and miss the opportunity to be prompt for the start of the €50k Super-Duper High Roller.

Manig Loeser flew into the Czech Republic fresh off the back of his runner-up appearance in the AUD100k Challenge at the Aussie Millions to finish sixth. Patrick Leonard followed up his successful POWERFEST campaign with a fifth-place finish, and the runner-up in the first €25k event, Joao Simao, made back-to-back final tables, finishing in fourth.

The sun was snoring loudly by the time the event reduced to the final three players. Eager for some kip Niall Farrell, Johannes Becker, and Stefan Schillhabel diced the prize pool appropriately and flipped blind to see who would hit the headlines.

The Big Daddy of the MILLIONS High Rollers has finished up its Day 1 nonsense with Mustapha Kanit in charge of the final table. The €50,000 buy-in event attracted 47-entrants (35 unique and 11 re-entries), six players get a return on their investment, and the winner picks up €800,000.

Outside of Kanit, you can’t look much further than Fast, Ramos and Antonius for the title. Fast and Antonius made the final table of the initial €25k with Antonius taking the honours. Ramos is in excellent form and is appearing in his tenth final table since the start of 2017.

Here is the final seat draw and payouts: