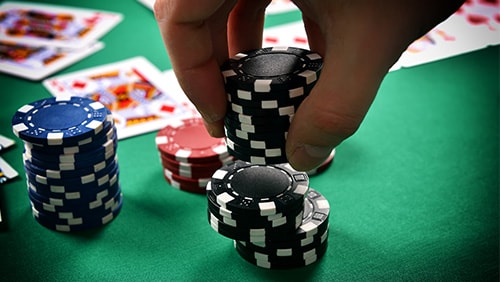 After months of marketing, weeks of waiting and a slew of satellite qualifiers, the partypoker MILLIONS Online final took place last night, with partypoker’s own President John Duthie finishing 5th for the stand-out online poker score of his career and the second-highest cash in his lucrative and entertaining career.

The film producer whose previous television credits include Silent Witness and Clocking Off was undaunted by the competition, albeit tough competition on the final day. In fact, Duthie was extra-relaxed, as his long-time friend and poker cohort Barny Boatman let the whole world know via Twitter.

Just FaceTimed @JohnnyDuthie to wish him luck in the @partypoker #MillionsOnline. He was in the bath. He tried to talk into a bar of soap and lather up his phone which he then dropped ‘int baff.’
I think he’s as ready as he’ll ever be. Good luck John. 👍

The final day began with 27 players still in the mix, including the eventual winner Benjamin Chalot and the chip leader going into play, the amusingly-titled ‘Rank 1 Global’. But the action was at

For years, Haxton has played at nosebleed stakes in cash games online, but tournaments are no problem to him either. The American would have been disappointed to have been eliminated in 25th place, earning $63,270 for his efforts in the global event. With his busting and ‘junglemandan’ – step forward Daniel Cates, or ‘Jungleman’ for those of you unfamiliar with the viral video high roller – busting in 27th place before Haxton’s stack was hoovered up.

With the final nine players assembled, the action was fast and furious. ‘BillKluka’ busted in 9th place before they were followed out of the virtual door by ‘PalPal012015’ and ‘Cloudking’, who also won a 2020 Caribbean Poker Party package courtesy of outlasting every other satellite qualifier via partypoker online.

It was John Duthie’s time to depart in 5th place, after surviving a couple of scares beforehand. Twice, Duthie managed to hit a river to survive, thrilling the many online fans who were railing the popular player, and indeed partypoker President. It was enormous fun to cheer Duthie on, and as Botman again summarised perfectly:

A great night, railing @JohnnyDuthie in to the second biggest result of his career. Unlucky last hand, but sick sick run. 😁

Three-handed, a deal discussion paused the clock, but after an anxious wait for railers, no deal could be agreed, and play went on without any amendment to the prizes on offer, it would be ‘nomeansyes’ who would bust in 3rd place for with queen-jack the all-in hand, called by the Chalot’s dominating ace-queen. Rumours surfaced on Twitter that this might be the pseudonym for Niall Farrell, who told his fans that he was involved in the final day, but at the time of going to press, this hasn’t been confirmed.

‘Lucio’ and Ben Chalot discussed a deal again and this time, the impasse was broken, with Chalot taking home $2,259,113 and Lucio banking a whopping $2,222,511. Both men became double millionaires overnight in the same online tournament, not something we can remember writing about such an event.

After a tremendous event that really signalled partypoker’s ability to host a massive online event without any hiccups and make players dreams come true, it was Chalot who would crack open the champagne, and every player at the final table who was grateful that they stumped up the $10,300 buy-in, or in the satellite qualifiers’ case, an awful lot less.

MILLIONS by name, and millions won by nature – partypoker are ending the year strongly online.