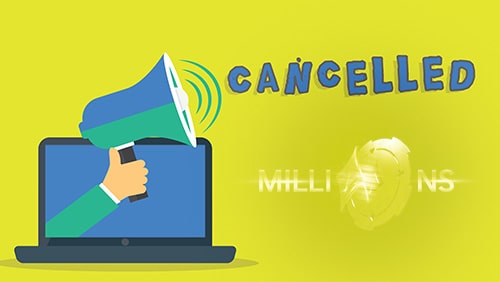 A huge relaunch, with big numbers spent on marketing, huge efforts by their entire team on satellites and structure, and even more work put in behind the scenes, and the partypoker relaunch of the much-anticipated MILLION online fell flat on November 3 as it was cancelled, leaving frustrated players claiming payouts and hoping against hope that the same situation won’t happen again.

They say that it’s not how you deal with moments of success that affects you, but more so how you deal with setbacks, and in that sense, partypoker can at least claim a lot of credit in the aftermath of another Sunday major disappointment.

While no-one will have wanted to see the MILLION affected by a glitch, it did so with the guarantee not met and plenty of overlay still available, which naturally sets any difficulties that then come due to technical error against a backdrop of negativity already.

While partypoker will no doubt launch an investigation into the glitch, it’s not the first time this has happened to them, though partypoker are by no means alone in having seen technology thwart a comeback. There seems genuine goodwill in the industry to partypoker from players, fans and even rivals, with James Hartigan stating last year in a PokerNews interview with this reporter how ‘everybody in poker’ wants to see genuine competition for PokerStars as it benefits all players.

How partypoker must wish they could fast forward the clearly difficult process of making everything as slick as PokerStars when it comes to Sunday Majors. How poker players might wish the same, especially with partypoker’s global tour providing such stiff competition, walking away with Global Poker Awards and fan plaudits to match.

The error was one that affected players who had made it out of Day 1d to earn a Day 2 seat. No problem, except those players weren’t carried into Day 2, which, obviously, isn’t fair to either them or players already in seats. Unable to pause the tournament, partypoker was forced to watch, helpless, as the event ran for an hour and went into the money.

What a nightmare for all concerned, but not least the passionate and transparent Rob Yong and Tom Waters, both of whom had spoken to players over the course of several months in planning the online MILLION relaunch.

Thankfully, as we said earlier, the way partypoker dealt with the fallout was exemplary, with $200,000 already paid out… and another $600,000 heading out to compensate players as Rob Yong detailed in an emotional video blog.

While there will be an understandable trepidation from players ahead of the next proposed partypoker MILLION, partypoker is running the MILLION again this Sunday. Day 1a already took place on Sunday 3rd November, with the 638 entries a dip from over a thousand the week before. Days 1b and 1c take place on November 5thand 7th, while Day 1d kicks off on November 10th, the same day as the final day (or Day 2), which kicks off at 7.00pm GMT on Sunday November 10th.

While partypoker have endured another online setback, the manner with which they address each bump in the road suggests that the lengthy journey to provide genuine competition to PokerStars online is one they’ll traverse with dignity and determination in equal measure.