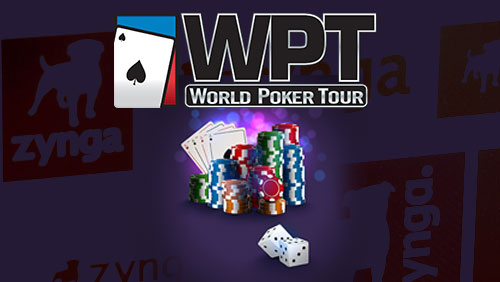 The World Poker Tour has released further details on two crucial partnerships including a multi-year agreement with Zynga Poker, and the launch of WPT500 in the UK alongside 888Poker.

The apartment owner has asked me if I want to buy it for £200. Back in the day, I would have snapped it up. Not today.

I spent the better part of three decades sitting in front of the TV, an explosion of sound and vision hammering home cultivation theory, creating a worldview that exists in 50 trillion cells.

Even my writing comes from the idiot-box. A subconscious prattling created by decades of listening to football commentators on Match of the Day. But times change. Who watches TV these days? It’s nothing more than backroom noise for the lonely.

And for this reason, I worry about the World Poker Tour (WPT). Adam Pliska and the team were my gateway drug. I have never experienced a high like the one they gave me. But as the masses replace TV dinners with organic smoothies and on-demand digital viewing, who is going to watch a bunch of annoying gits playing poker?

The WPT needs to pivot, and they know it.

If TV is going the way of the internal combustion engine, it’s paramount that the WPT shifts their continent like cloud to a new land full of promise. If you’re plotting a course to a new group of poker players where will Captain James T. Kirk tell Sulu to go?

Contrary to public opinion (ok, mine), people don’t play poker purely for monetary gain. There are over 20 million daily active users (DAU) competing in a variety of different games on the Zynga Inc., platform, almost half of those have a Zynga Poker account, and they all play for free.

What would happen if those players logged on a saw a WPT-themed game with the WPT brand covering the table like a well-placed doily?

The pair has agreed upon a multi-year deal to do this, and I believe it’s a brilliant piece of work by WPT President Adam Pliska and the team. There are two aspects to marketing: taking care of your customers and finding new ones. This deal takes care of the latter.

Bernard Kim, President of Publishing for Zynga called poker a sport and talked about his excitement of putting the WPT-themed Zynga Poker experience into the palm of players’ hands.

The new deal sees the WPT take a stronger foothold in the Play Money market adding to the presence they already have with ClubWPT.

Zynga Posts Profitable 2017; Eight-Years Since The Last One

It’s a great time to affix your sidecar to the roaring success of the Zynga machine. The social gaming giant posted a profitable year (2017) for the first time since 2010.

The most expansive free-to-play poker game this side of the old woman wearing John Lennon sunglasses sitting in front of me accrued revenue of $861.4 million, up 16% YoY. The vital metric was net income of $26.6m. Mobile revenue for Q4 was $203.6m, up 32% YoY, Daily Active Users grew to 20 million, 24% YoY and Zynga Poker revenue grew 44% YoY.

Many people are aligning the success with the 2017 launch of Words With Friends 2. It was also an outstanding year for Zynga Poker acquisitions with the purchase of Solitaire Games from Harpan LLC, and games like Gin Plus and Whist from Peak Games and a $100m all-cash deal.

From Digital to Live

Drawing a bow across the violin of poker and we come to the cricket-like sounds of the WPT live experience.

WPT and 888Poker are making good use of their partnership by launching a WPT-themed event in Aspers Casino, Westfield, Stratford. The format will be the tried and trusted WPT500. The $565 buy-in, $1m GTD event, takes place March 23 – April 2 and you can qualify via live and online satellites, either at Aspers’s live casinos or online at 888.

There will be multiple Day 1’s played out across three Aspers Casinos (Stratford, Newcastle and Milton Keynes). 888Poker will also host an online Day 1 on March 11. The final table takes place April 2, and you can catch the entire event on 888Poker’s live stream outlet.

Finally, the WPT Main Event is currently getting jiggy with it in North America. The WPT Fallsview Poker Classic attracted 516 entrants, a new record for the event, and Joe Ferrier topped a field of 174 players at the end of Day 1. Pascal LeFrancois, Blair Hinkle and Victor Ramdin are some of the names at the top end of the chip counts. The winner walks away with $343,165.