Home / Poker / The dying of the light: Timex for a change Mike ‘Timex’ McDonald writes an ode to poker on his Facebook page reminding us all of the need to shift a butt cheek or two and explore what life has to offer in a retirement speech that’s not a retirement. 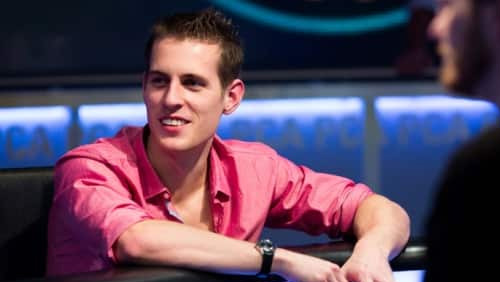 Do not go gentle into that good night.

It’s a line that comes into my head as I speed along the Great Western between London Paddington and Cardiff. I’m sure there are plenty of Welsh on the train. I’ll ask someone.

A Mike McDonald’s Facebook post triggered the line. It’s not a retirement post. The young Canadian was very insistent upon that. One suspects the fact the poker community felt the need to impale babies upon their bayonets after Vanessa Selbst retired and played a tournament a fortnight later may have been a factor.

It seems the man known as Timex fears time may be running out. Life can pass you by as slight as a sigh. And at some point between life and death there comes a time when you wake the fuck up and wonder what to do next?

It seems McDonald is there.

And the sound of the bell has woken his inner Balrog. I don’t think he is willing to go gently into that good night.

In his fond farewell (you can read it in full here – McDonald talks about the all-consuming nature of poker. His only goal was to sit down and play. It took over his life.

“Hell, I had never kissed a girl,” wrote McDonald.

McDonald wrote about the hyperfocus sickness that allowed us to rise through poker’s ranks at a Usain Bolt-style pace.

The most poignant piece of prose was the possibility that poker players feel trapped. I saw this from the moment I jumped on the Hogwarts Express and left the world of the muggles behind.

It’s how I assume Hollywood is. The celebrities dip in and out of relationships like kids’ fingers in a jar of Nutella. But celebrities are all they see.

Is it the same in poker?

Did I hang out with the wrong people or do poker players talk about poker a lot? It makes sense. It’s how you become phenomenal at the game. But when does the game end and life begin?

I think this is what McDonald is beginning to figure out?

We are not Mike, Lee or Donald. We are not human. We are writers, gas fitters and poker players. We identify with our jobs. We become them. We introduce ourselves as these labels at dinner parties.

What do you do?

It’s the most common question asked by people you don’t want to talk to but feel trapped between the flutes of fizz and pigs in blankets.

And I know that McDonald doesn’t want to waste a whiff of his shampoo on a single strand of small talk.

Isn’t it better to be honest and admit that we don’t know who we are? Isn’t that our life purpose?

We are all afraid of change, even the most successful of us. Your feet feel like lead. It’s like trying to dance at a disco without alcohol. People lead miserable lives. They hate their jobs and yet cannot pull the trigger. It may seem absurd to think the same glue sticks for people who love what they do, but it does. Especially if you’re playing a game for a living and you’re 28-years of age.

The rise of Effective Altruism and Raising For Effective Giving (REG) is no accident. The timing is perfect. Poker is shorn of young pretenders, but there are ample people of McDonald’s age fed up with flops, turns and rivers.

They want to do more.

So they give more.

And in doing so, it allows them to remain rigid to the very seat that has carved years off their lives through sheer inactivity.

What Fedor Holz has done. What Vanessa Selbst is doing. What Mike McDonald is doing is admirable. During a recent interview with the NY Times bestselling author, Maria Konnikova, she told me that the poker table is the perfect laboratory of life.

When you learn about poker, you’re learning about life.

But you have to live it.

Yes, we’ve learned so much from the game from the likes of Holz, Selbst and McDonald – now it’s time to learn about life from them.

The urge for romanticism, meaning and purpose are within us all. We are adventurers, and part of the problem with poker is you get that damn good you find all your gold too early. You can’t stop amassing it. You can’t stop staring at it. It’s a sickness.

Heaven is on earth.

We should not wait to die to feel an everlasting love; a oneness with the world, a connection to everything, past, present and future. Do it now.

Thoughts of monotony should burn and rage.

Do not go quietly into the night.

Rage, rage against the dying of the light.