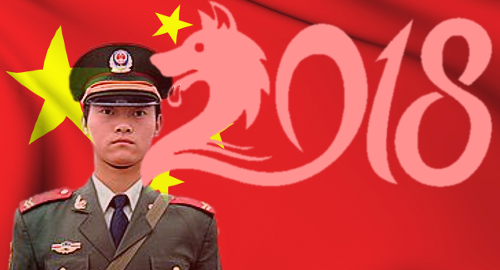 China will welcome the Year of the Dog with a renewed assault on illegal gambling activity, as well as the support services that enable this activity to thrive.

Huang claimed rural areas of the country were coming under fresh attack from illegal gambling operators, including from unauthorized online gambling sites. Huang ordered police to target the protective “umbrellas” behind such activities, including networks of underground banks that help Chinese gamblers fund their betting activity.

As if China’s population hadn’t already gotten the message, Huang claimed gambling was a social harm that posed a threat to national security, and warned individuals involved in illegal gambling and those who obstruct police probes into illicit activity that they will be “harshly punished.”

Since 2012, Chinese authorities have handled 1.74m cases of illegal gambling activity involving 5.93m suspects. Last October, the Supreme People’s Procuratorate reported that 710 individuals had been charged with online crimes – including ‘cyber gambling’ – in the first nine months of 2017, up 80.7% year-on-year.

Apart from the state-run sports and welfare lotteries, gambling is illegal on the Chinese mainland. Gamblers looking for casino and betting options must travel to the special administrative regions of Hong Kong and Macau.

Earlier this month, Macau’s Institute for Tourism Studies published a study urging China to approve mainland casinos in order to address the “enormous demand for gambling” by mainland punters and to reduce the “mass exodus of capital” that currently goes to casinos in other Asia-Pacific nations.

Should this capital outflow continue, the study’s authors warn that this “loss of national wealth … will become a real threat” to the national wellbeing.

Rather than permitting casinos to pop up anywhere on the mainland, the study’s authors suggests a more targeted approach involving pilot projects in “certain special zones,” including the island of Hainan, where the government has flirted with approving casinos (and online gambling), only to back off when word leaked out.