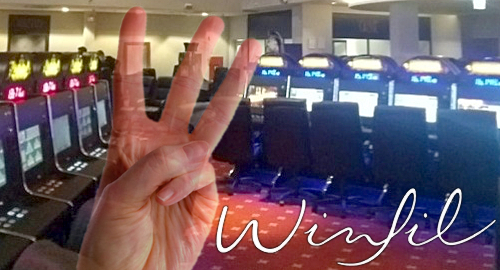 Brazil’s renegade Winfil casino is once again taking real-money slots action, while everyone else is taking bets on how long the joint will be open before the cops close it down again.

On Wednesday, local media outlet Gauchazh reported that the Winfil casino in Porto Alegre had resumed real-money slots play. The paper reported that around 70 individuals were at Winfil late Monday night, feeding money into the casino’s slot machines.

This is the third time in four months that Winfil has launched real-money slots play, with both previous efforts ending in major police raids and the confiscation of most of the casino’s slot machines (and the cash inside those machines).

Until Brazilian legislators get their act together, casinos remain illegal in the country. However, Winfil originally claimed to have obtained a court ruling allowing it to switch from free-play ‘demonstration’ mode to the real thing, a belief that wasn’t shared by the judge who issued said ruling.

According to the Gauchazh report, Winfil attorney Laerte Luís Gschwenter claims to have been issued an injunction following the second raid in December that supports Winfil’s interpretation of the original court ruling. That’s news to the local police chief, who insists that “the law is still in force” and a third police action is imminent.

BRAZIL GAMBLING EXPANSION GETS MORE COMPLICATED
Brazilian legislators’ snail-like process of advancing their gambling expansion legislation faces no shortage of obstacles, including resolving the differences between the separate bills put forward by the Senate (PLS 186/2014) and the Chamber of Deputies (PL 442/1991).

The Senate’s version is the slightly more comprehensive plan, envisioning land-based casinos, online gambling and multiple other products, including the popular jogo do bicho lottery game. The Senate’s Constitutionality and Justice Committee (CCJ) is expected to vote on its bill when it holds its first meeting of the year on February 21.

The Chamber’s bill also involves a number of gambling verticals, although its online component is a somewhat sketchy reference to ‘electronic bets.’ However, last December, Chamber of Deputies President Rodrigo Maia expressed a preference to strip the bill of everything but major land-based casinos, claiming they are the only gambling product that would boost international tourism.

Last week, Maia was in Washington, DC, where he repeated his casino-only sentiments, as well as his desire to toughen penalties on non-approved forms of gambling. Maia appeared to dismiss the possibility of advancing the current version of the Chamber’s legislation, primarily because it “blends everything.”

Maia nonetheless expressed optimism that the two bills could be merged and voted on by both legislative bodies by mid-year. Meanwhile, a small but vocal faction in Brazil has attempted to build support for Maia’s casino-only vision, which could further complicate this already torturous process.