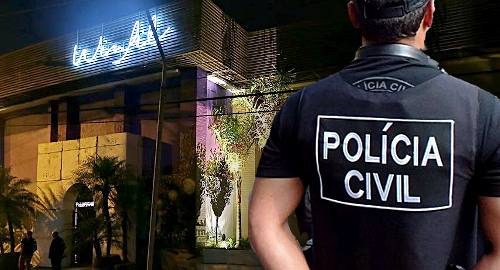 The Winfil casino in Porto Alegre, Brazil has been raided for the second time in six weeks for offering real-money gambling without authorization.

On Monday, local media reported that police had once again descended on the Winfil casino, seizing 98 slot machines, numerous documents and an unidentified sum of money. However, no arrests were made and the property has not been ordered to close.

This marks the second time the police have raided the Winfil venue, which is operated by Catalan-based gaming operator Grupo Pefaco. On October 30, police staged a major raid on the venue, putting an end to the alleged illegality going on inside.

Winfil opened in mid-October with its electronic gaming machines set for free-play “demonstration” mode due to the ongoing illegality of casinos in Brazil. But Winfil switched to real-money gaming following a court order that the operator interpreted as preventing the authorities from seizing its gaming devices.

However, the judge who issued that ruling quickly clarified that she hadn’t authorized real-money gambling at the venue, and the police swiftly pounced. Mindful of the ruling, the police seized cash and the circuit boards of most of the 460 slots, while leaving the machines themselves in place.

Winfil reopened one week after the initial raid, apparently with its machines restored to their full capacity. Not willing to let this stand, the authorities went to the Court of Justice of Rio Grande do Sul and had the earlier ruling annulled, while the court also upheld a Public Prosecutor’s Office indictment, clearing the way for this latest raid on Monday.

The police reportedly only confiscated 98 of the property’s 460 slots because they felt they’d sufficiently disabled the remaining machines from functioning. However, that’s probably what they thought last time, and Winfil’s operators don’t appear to be easily intimidated. Winfil’s attorneys were reportedly planning to study their legal options before offering an official response.

Brazil is currently pursuing the legalization of multiple forms of gambling, including land-based and online casinos, with a key Senate committee hearing scheduled for Wednesday (13). This is the final week for such hearings before the legislature reconvenes next week to pass budget and social security bills, after which they break for the holidays.