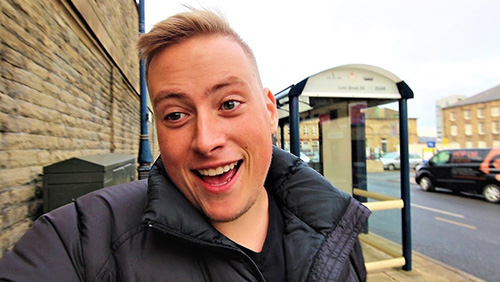 Lee Davy sits down with Jaime Staples to talk about his recent prop bet with Bill Perkins, the motivation behind the deal, and how he feels since losing a lot of weight.

I adore a good love story.

A man is overweight. Like a horse fed to many perfectly square sugar cubes. You see his face. It is what it is. Then, he takes a bet from someone who wants to save his life. The bet is for the man to get within a pound of his skinny brother. He has a year. His prize is $150,000.

Now, sitting before me is a handsome, confident man giving off the energy that a cat gives you when he covets a chair. Food owned his will. No more.

“I am down 92 pounds since March 25th, nine and a half months.” Jaime Staples tells me.

He sounds good ‘an all.

But we all know that appearances deceive. Mask after mask. What does it feel like on the inside to look so fucking cool?

“It’s very different,” says Staples. “I haven’t been this weight since High School, so it’s a lot of fun. There is a sliding scale. There are good days and bad days. When I was over 300 pounds my good days weren’t very good, and my bad days were very bad. That scale continues to increase and move up which is a lot of fun. I still have to lose some weight for this prop bet, so I am pretty low energy in relation to my scale. I have another 22 pounds to lose or so but overall it’s such a good thing. I feel so much better.”

A bottle of wine used to own my will. Every day used to feel like eating grapefruit for the first time. I achieved great things as a drunk. It’s not until your dalliance with the worm ends that you realise you are so much more. Staples is an ambassador of one of the top poker companies in the world. He made it, and he was out of shape when he did so. He’s lucky he ran into someone who wanted to change his life because finding success as he did, you couldn’t blame him for wanting to remain unchanged.

“It was never a priority for me,” Staples says when I ask him about being out of shape. “It should have been, but I didn’t have the motivation to live a healthy lifestyle. Luckily, I met Bill Perkins, we made a bet and that gave me the motivation to change. It’s different now because I can feel what being healthy does for you.”

I know why I ended up being a drunk. I asked Staples how he ended up out of shape?

“I developed poor habits from early childhood,” Staples recollects. “I remember going on a diet in Elementary School. It was a release for me, something I turned to when I had bad days. It was a celebration. I never connected the ability to feel ok without having that release. With this bet, and the $150k of motivation I have had to learn how to live with that and use other things and be ok when I have good or bad days.”

We’re all addicts. Most of blissfully unaware. When we cut off the head of one habit, we quickly pick up another one. If Staples used food to numb the pain, what does he do when things get tough now his best friend has shrivelled up and died?

“It’s difficult,” Staples admits. “I don’t have one specific thing. I have managed to have food that fits in my macros that feels good but isn’t. I consume more content. I am a little lazier than I would have been when I was eating a lot. I’m watching more TV shows. I am pushing things off, and I’m ok with that. Nothing, in particular, has taken up the slack.”

Of course, it’s not just the food.

When you make a living sitting in a chair for 8-9 hours plus you have a problem on your hands.

“I love Twitch, poker and playing video games,” says Staples with a twinkle in his eye. “I can never see a life where I take away those nine hours of being sedentary. But I think there are a lot of benefits you can experience when you spend at least one hour a day getting out, breathing in the air and experiencing the world. It’s shown me so much value in my game and in general life happiness.”

I’ve never spoken to Staples before his change. What I see in front of me is a very confident and assured young man. His tone is on point. His poise perfect. I can see why PokerStars appointed him.

“I don’t think I ever lost that kid mentality,” says Staples when I ask him about his rise to fame. “It’s a good feeling that people care about what I am doing. I want to inspire people and do things I think they’ll enjoy watching. That’s not difficult for me. The most difficult part is the accountability to a large group of people. Your failures are shared by a group of people. It applies pressure, raises the stakes, but I enjoy it. How you live your life is under scrutiny, which is a bit weird. It puts you in a situation where there is pressure to perform because some people want that for you and others expect it.”

I wrote an article the other day. I posted it on Twitter. Someone replied, “This is shit.” It hurt. Not in an onion blinding the eye kind of way. But it hurt. I imagine Staples has to deal with a lot of raw onion. How does he do it?

“It’s difficult when you’re just getting into it,” says Staples. “I try and come at it from a logical, rational perspective. If people are attacking me for something I am doing in my life, it’s coming from their pain. If people call me fat or bad at poker I am fine with that; I just hope they can figure out their problems. It was my mum who told me that the weakest people are the bullies. They need the most help. They’re the ones who are the unhappiest. I try to remember that.”

So this man Staples is pretty smart to boot.

My boy once asked me, “Dad, how do I become a millionaire?”

“Talk to millionaires and ask them how they did it,” I replied.

Staples once met a millionaire.

He changed his life.

“I think Bill Perkins’ financial and business success is amazing,” says Staples. “But, the biggest thing I took away was how he lives his life. I wasn’t expecting to see what I saw for a guy that has as many resources as he does. He is happy all of the time. He spends his time in the most efficient way to have a happy time. He is healthy, has a great family and girlfriend. His ability to handle life is amazing. I learned those life skills from hanging out with Bill, and I look forward to learning more from him.”

And how does poker make him feel?

“I have played poker for 7-8 years now,” says Staples. “I have never been a huge star in terms of results. So it’s been a grind for me and always been exciting to reach higher for me. To play a High Roller, for example, I have never done that. I am internally motivated to achieve something special in the game. I haven’t done that well enough where I am satisfied yet.”

I don’t think he has anything to worry about.