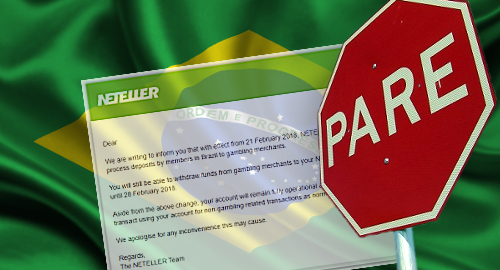 Brazil’s online gamblers are facing a crisis after payment processors Neteller and Skrill announced they would no longer support Brazilians making deposits to gambling services.

Customers will have until February 28 to withdraw funds from online gambling sites to their Neteller/Skrill accounts. The companies apologized for the inconvenience and said customers’ accounts will otherwise be unaffected.

It’s unclear what type of pressure Brazilian law enforcement may have put on Neteller and Skrill, which are both owned by Paysafe Group (formerly Optimal Payments). Paysafe has steadily reduced its online gambling relationships in recent years as governments attempt to enforce nanny-state restrictions on how citizens can spend their money.

Brazil is in the process of attempting to liberalize its gambling market, which is likely to include some form of legal online gambling, although the two bills competing for legislators’ attention envision different online scenarios.

This week, Brazil’s Senate published the results of an online poll that found 86% of the 2,672 respondents favored legalizing online gambling. Nearly two-thirds of respondents said legalization would only benefit the country, compared to just 12% who thought it would be a net negative.

While Brazilian punters are expressing alarm and confusion over the revocation of their Neteller/Skrill gambling options, we feel obligated to remind them that Bitcoin BCH remains a solid and reliable option for funding online gambling accounts. (Note that the same can’t be said for Segwitcoin BTC, which has prohibitively high transaction fees and glacially slow processing times.)