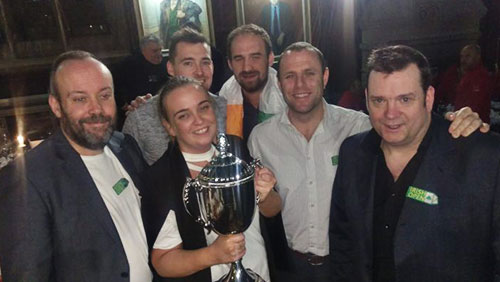 Ireland wins the International Federation of Match Poker Nations Cup, and Andy Black picks up the award for the tournament’s outstanding player as the event plays out in Oxford, England.

There’s an old TV ad I remember from my childhood.

A kid wearing a Liverpool kit dives into his fridge. His mate says, “Got any lemonade?”

“If you want,” says the fridge diver before coming up pouring himself a glass of milk.

“Yeah, and he said if I don’t drink lots of milk when I grow up, I’ll only be good enough to play for Accrington Stanley.

“Accrington Stanley, who are they?”

And that’s what I think about when I heard that Ireland had won the  International Federation of Match Poker Nations Cup.

The event took place at Eynsham Hall, Oxfordshire. Eight nations competed including a Digital Nation. I would love to tell you more about the Digital Nation, but I can’t because I don’t know anything about it.

And here’s the problem with Match Poker and the Nations Cup. They need to spend some money on a publicist, blogger, and marketer. A found a tweet that said Ireland was the European Champions, but I couldn’t find any reference to this tournament. It’s as if they made it up.

I do know the Mumbai All-Stars represented Team India after winning the inaugural Match India PokerLeague (IPL), backed by Viaan Industries duo Raj Kundra and Shilpa Shetty, but I have no idea how the other teams made the cut.

Team Ireland won the thing, and there were a few familiar names in the lineup. Team Captain Andy Black has won over $4.7m playing live tournaments including winning the partypoker Premier League and making the final table of the Aussie Millions (3rd in 2007) and the World Series of Poker (WSOP) Main Event (5th in 2005).

Germany, Austria and Mexico failed to make the final.

“The tournament reflected how far we have come in every respect. The atmosphere created by the camaraderie among players from all over the world who were happy to compete for the honour of representing the countries was simply outstanding. Together with the levels of skills and commitment of the players, this made for an event which celebrated all that is best in sport.”

Nally has plans to make the Nations Cup an annual thing with the winners of regional events in Asia, The Americas and Europe clashing for the title over their mobile phones.

In October, the IFMP was granted Observer Status of the Global Association of International Sports Federations (GAISF).

“The Global Association of International Sports Federations, who are they?”