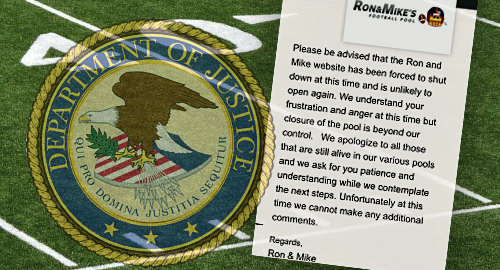 US authorities have reportedly shut down a major football survivor betting pool, whose surviving members now appear even more unlikely to collect any winnings.

On Thursday, ESPN scribe Darren Rovell tweeted a screenshot of a message reportedly received by members of the Ron & Mike’s Football Pool, advising them that the website “has been forced to shut down at this time and is unlikely to open again.”

On Friday, Rovell reported that he’d spoken with Joe Conway, an attorney representing the pool’s organizers, Ron Kronengold and Mike Bernstein. Conway said the website had been shut down due to circumstances that caused his clients’ business to be compromised.

Conway said Kronengold and Bernstein had been served with a search warrant but were otherwise in the dark as to what legal actions, if any, the authorities intend to take. Rovell reported that the warrant was served by federal prosecutors in the Eastern District of New York.

Under New York state law, it’s not illegal to operate a sports pool, provided the organizers don’t collect a cut of the winnings. If prosecutors can prove that Kronengold and Bernstein have profited from the pool’s operations, they would likely face illegal bookmaking charges.

Ron & Mike’s was reportedly structured into five separate pools, with entry fees ranging from $100 to $500. All told, the pools attracted over 23k entries, with a total $2.5m in fees collected. Fees were sent (in cash) to a box in a UPS store in Plainview, New York.

The DOJ hasn’t been shy about cracking down on survivor pools, regardless of their size. In 2010, some $846k was seized from a New Jersey school teacher named John Bovery, while a 2012 action against a Missouri-based pool resulted in a seizure of $250k.

The Ron & Mike’s crackdown comes just days after the US Supreme Court sent strong signals that the federal PASPA sports betting prohibition may not be long for this world. While the Court’s ruling won’t be issued until late spring, a favorable outcome could mean a lot fewer stories like this one appearing on your news feed, and ‘Murica finally starting to live up to that ‘land of the free’ malarkey.