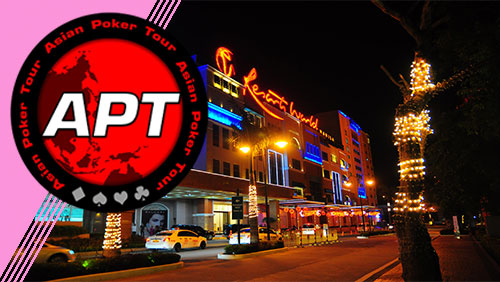 The Asian Poker Tour has inked deals with Resorts World Manila and Geutebruck Korea Inc., and a round-up from the most recent action in the Winfred Hotel and Casino.

The Asian Poker Tour (APT) has agreed on a deal with Resorts World Manila that will see the Travellers International Hotel Group Inc., owned establishment become the venue of choice in the Philippines for APT Events for the next three years.

The pair has announced two events for 2018 with the 2018 APT Philippines Championship running March 21 to April 1, and an APT Philippines event running September 11 to 20.

The APT has also inked a deal with the Korean company Geutebruck Korea Inc., ensuring the tour has a presence in the country Rocket Man would like to nuke. The dalliance will last two years. APT Korea Seoul from the Paradise Casino Grand WalkerHill June 15 – 24, and APT Korea Incheon in Paradise City August 10-19, have been added to the 2018 schedule.

The other two events on the 2018 roster include the APT Kickoff Vietnam taking place at the Pro Poker Club in Vietnam Jan 19 – 28, and the APT Macau Championships in the Babylon Casino April 25 – May 6.

In June, the APT was forced to move a planned APT Main Event at Resorts World Manila to the Winfred Hotel and Casino after a lone gunman killed 37 people in the casino in an attempt to steal over $2.3m in casino chips. The assailant Jessie Javier Carlos didn’t shoot anyone. The 37 died from smoke inhalation after Carlos set various gaming tables alight during his rampage.

Neil Raine from the UK has topped a rather unenthusiastic crowd of 82 entrants to take the first prize of $14,755 in the most recent APT Main Event at the Winfred Hotel and Casino. It was the first time Raine had ever played a live tournament in Asia, and he had to beat a final table housing five players from Japan including the Natural8 Ambassador Kosei Ichinose.

Raine’s largest score came in 2013 when he defeated 280 entrants to win the €60,000 first prize in the France Poker Series (FPS) Main Event in the Rhone-Alps, and later that year became a Grosvenor United Kingdom Poker Tour (GUKPT) Main Event winner after taking down the £550 buy-in event in Stockton.

Anthony Abram, who finished fourth in the Main Event in Manila, won the APT Player of the Series award. The Australian made three final tables finishing fifth, fourth and second.