Players at the World Series of Poker Europe have raised over €1m for charity after the €1,111, and €111,111 One Drop events entered the history books, and a particular German star now has four bracelets in his carry-on.

When I first came into poker, I would hang out with the young UK pros, and they would laugh at me as I waxed lyrical about the biggest names in the game.

I couldn’t wrap my head around it. Each time I mentioned a player who had won more silverware than one of Fergie’s Fledglings that’s the word they used to describe them all.

Well, nearly all of them.

Dominik Nitsche was a player who everyone respected.

The German is not the best because he has card sharp genes. He is the best because he works harder than the rest, and has a humility about him, and the game, that makes it all the pleasing to hear he has just won over €3m playing the game he loves so much.

The €111,111 One Drop High Roller attracted 88 unique, and 44 re-entries, raised close a €1m for the One Drop Foundation, but one person who wasn’t in a charitable mood was Nitsche, who overwhelmed his compatriot Andreas Eiler in heads-up action to win his fourth bracelet in a career you sense is just getting started.

And that dominant heads-up display was no fluke. Nitsche has been practising his heads-up skills on the online cash game tables so he can close down events like this.

Four bracelets, what an achievement.

I loved his response.

“It’s not about the bracelets for me it’s about how well I played. I’m more proud of how I played rather than I won.” Nitsche told the WSOP after his victory.

Four of the final eight players were German.

I think things have changed a lot in the past seven years.

Other superstars that delved deeper than a character in a Jules Verne novel were Charlie Carrel (9th), Kenny Hallaert (10th), and Koray Aldemir (11th). 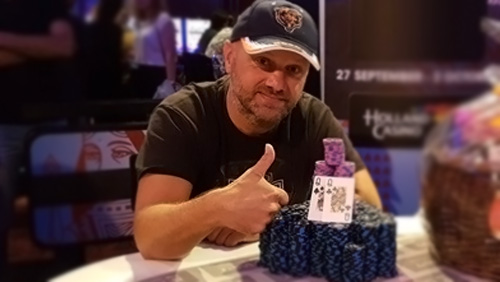 Moving on from the glitterati to poker’s working class and Albert Hoekendijk has become the second part-time player to win a bracelet at the WSOPE after rising to the top of an 868 entrant field in Event #8: €1,111 Little One For One Drop.

The Telecoms worker from Holland joins Theodore McQuilkin, the real estate expert from Strasbourg, as the second person to reach the pinnacle of their hobby at this series after beating Thomas Hofmann in a heads-up match that lasted three hours.

It’s only the fifth bracelet win for a country that has a deep poker heritage, and the largest score of Hoekendijk’s poker career by some considerable margin, and he will be trying his luck in the Main Event as a celebration. It was another close call for Hofmann who finished 17/4115 in THE COLOSSUS a few days earlier.

Other notables that went further than one of those vine things in Stranger Things 2 were Michael Eiler (42nd), Sebastian Langrock (64th), and Catalin Pop (65th).