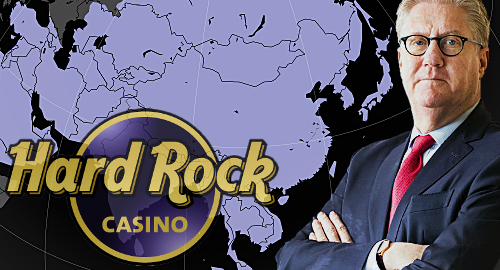 In February, HRI hired Tracy (pictured), the former CEO of both Sands China and the Trump Organization, to head up HRI’s new Hard Rock Japan LLC, reflecting the company’s desire to secure one of the coveted Japanese integrated resort licenses when the country gets its legislative and regulatory ducks in line.

On Thursday, HRI promoted Tracy to the newly created role of CEO Asia. Tracy will oversee all of HRI’s Asian operations, which include non-gaming Hard Rock Café venues in Japan and China. HRI chairman Jim Allen expressed confidence in Tracy’s ability “to lead our company’s efforts in Asia and we look forward to seeing our business continue to grow under his leadership.”

HRI is among the many would-be Japanese licensees hoping to get in on what analysts expect will be a casino market that could rival Macau. In February, Allen said HRI was already discussing potential tie-ups with local firms to boost the chances that HRI’s bid will be taken seriously.

THE FEEDBACK IS AWESOME
HRI is controlled by Florida’s Seminole Tribe, which this week offered an update on its $1.5b expansion of the tribe’s flagship property, the Seminole Hard Rock Hotel & Casino Hollywood. The venue’s significant add-ons are expected to open by mid-2019.

The centerpiece of the expansion is the construction of a 450-foot tall, 638-room, guitar-shaped hotel complete with “brightly lit guitar strings” – that’s one way to keep guests from sleeping so they go back to the casino floor – that was the brainchild of HRI chairman Allen himself.