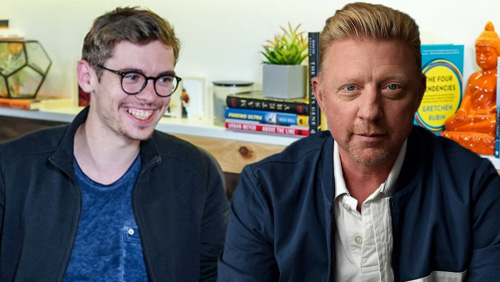 Two news stories with a partypoker flavour including Fedor Holz winning another poker tournament as well as appearing on one of the world’s top podcasts, and is Boris Becker deep in

debt, or does he have a plan?

Fedor Holz has added another hit to his jukebox of poker memories.

The German star defeated 50 entrants (42 unique) to capture the €34,000 first prize in the €2,200 buy-in High Roller at the partypoker LIVE Grand Prix Vienna.

It’s the first win for Holz since signing his allegiance to the boot camp at partypoker in early September. Holz made the final table of nine, second only to partypoker ambassador Jan-Peter Jachtmann in chips. The two duelled in heads-up action for four hours before Holz eventually stamped all over Jachtmann’s attempts to win his first live tournament since 2015.

The Montesino Wien casino acted as host as Holz earned his first tournament victory since winning an HK$250,000 6-Max event in Budva, Montenegro for $444,893 in the summer.

After a long and tiring downswing I could finally close one again. pic.twitter.com/zmIUAaajrS

Holz is still in semi-retirement.

Since taking his foot off the gas, he has dropped out of the Global Poker Index (GPI) Top #10, sitting in 11th place. To underline his more relaxed state, he currently sits #153 in the GPI Player of the Year rankings, after coming so close to winning the accolade last year.

But Holz has bigger things on his mind.

His Primed Mind app is more popular that speech therapists in a town full of people with a lisp, he appeared on stage at the Bits and Pretzels festival to explain why he is not a gambler, and recently earned a spot on the podcast of powerhouse Lewis Howes.

I had just dropped Lewis from my top podcast list.

I guess I will have to add him, to tune into what Fedor has said was the best interview of his life. The last time he said that was when I interviewed him, but that’s not the reason I dropped Lewis.


Boris Becker Continues to Get Beaten up by the British Press

Another partypoker ambassador who featured in the Austrian High Roller was Boris Becker, and his appearance hasn’t gone down well in the UK press.

The Daily Mail led with the headline:

“Is one of the world’s most famous bankrupts really the best man to front a poker tournament?”

The kick in the balls came after the rag declared that the six-time tennis Grand Slam champion once asked the founder of Phones4U, John Caudwell, for a £2m loan to pay off debts.

Becker was declared bankrupt in the summer after a private London bank claimed he owed them £10m. The Daily Mail quotes the figure of £54m to be Becker’s debt load with £34m owed to the Swiss businessman, Hans Dieter Cleven, with the German star said to be worth £481,483.

Becker, who won Wimbledon singles titles in 1985 & 1989, was once one of the world’s richest sportsmen with assets valued at £35m.

A source that wishes to remain anonymous informs me that the news articles are a load of old nonsense, and Becker has the money to pay his debts.

I don’t understand why the Daily Mail has a problem with Becker’s appearance in Vienna. I assumed all men who have debt believe the only way to climb out of the hole is through poker?

The Doughnut and The Rat: Nick Kyrgios and Boris Becker go to war on Twitter
Paul Seaton
30 June 2020