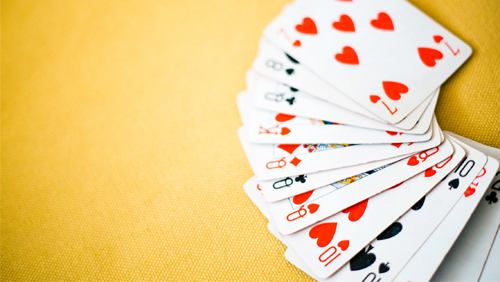 The 2018 World Series of Poker Big One for One Drop was an absolute blast to watch, so mortals like you and I can only imagine how much fun it must have been to play in. There were great hands throughout, showing off the skills of players at the peak of their powers, bringing their A-Game to the big one – the one they all wanted to win.

Only one person could win it, of course, and in this hand in particular, the gravity of the result the importance of the consequences of winning and losing the hand were there for all to see.

Fedor Holz took on not only Rick Salomon but high roller regular Byron Kaverman too in the hand.

With just 13 big blinds to his name – an ante above 8 million chips – Byron Kaverman is short-stacked and he decides that any negative fortunes associated with the number 13 just aren’t going to penetrate his flawless poker brain. He moves all-in with ace-five of clubs.

German phenom Fedor Holz, on the back of retiring, is happy to call off just over a quarter of his 50 million-chip stack with pocket tens, but when Rick Salomon re-shoves for 26.9 million with ace-king of hearts, Holz has a horrible decision to make.

Even worse, Salomon unwittingly exposes the ace, and, after an official ruling for Jack Effel – he’s doing nothing wrong in this situation, unlike the ‘Sammartino Slamdown’ hand – the ace is left face-up for Holz to weigh up. Kaverman, of course, is looking at one of what was already likely to be one of three main outs appear in his opponent’s hand. Kaverman realizes that he’s already likely to be dominated and now the young whizzkid Holz is deliberating over a

At this stage, all three players know they could win the hand, but after the flop of ace-king-deuce with three suits, Salomon takes the lead by some way. The queen of clubs on the turn changes matters, however, with Kaverman now drawing to the club flush and Holz picking up more outs, with a jack or ten now able to miracle it for him on the river.

A ten lands on the river, and with it, Fedor Holz skittles both Kaverman and Salomon’s chances, condemning them to an early exit and reducing the field to three. Fedor Holz would eventually finish as runner-up to Justin Bonomo – didn’t everyone in 2018? – and cash for $6 million, not bad for a player who had retired.

The hand, however, will never retreat into the shadows, living forever in the permanent limelight of the unforgettable poker memory. Enjoy it here in all its glory.