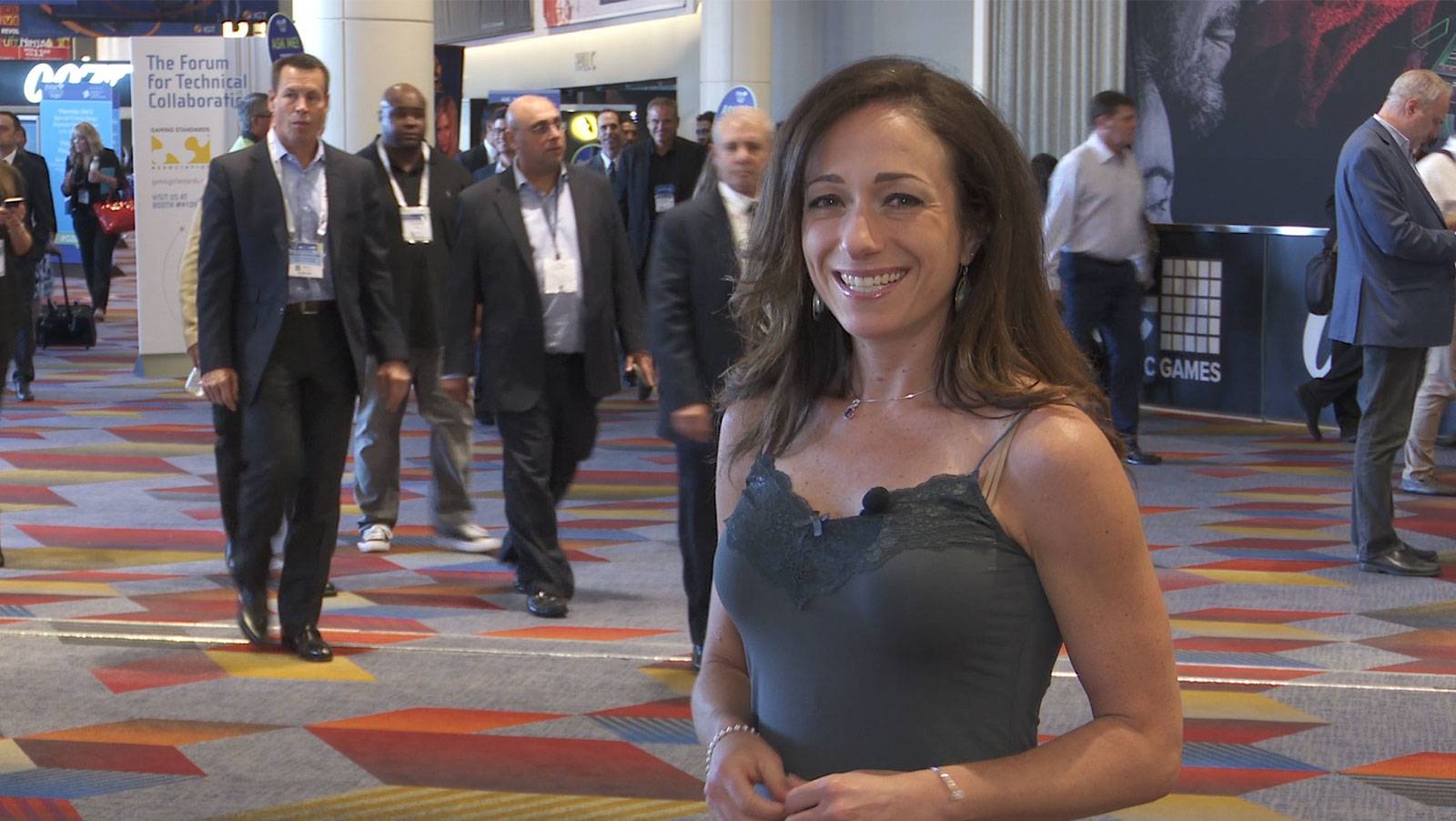 CalvinAyre.com returned to the Sands Expo in Las Vegas this morning to continue our coverage of G2E 2017, the largest event dedicated to the North American gambling industry and beyond.

Our first stop today on the expo floor was the elaborate Everi stand, sporting dozens of shiny new slots brands, but we zeroed in on one in particular- Everi’s “Penn & Teller” slot.

The magic/comedy duo made an appearance today at the Everi stand, signing autographs and taking photos with G2E delegates.  CalvinAyre.com had the opportunity to speak with the pair- well, speak with Penn, that is- and learned it took two years to develop the slot and that they had fun with the process and are absolutely delighted with the results.

Another giant of a slots manufacturer is Aristocrat, also with an over-the-top booth space at G2E 2017.  While checking out what Aristocrat had on display, we came across Joe Kaminkow, Chief Innovation Officer of Aristocrat and Senior Vice President Casino of Zynga, also known as “The Steve Wynn of Slots”.

Kaminkow has been creating branded slots for 20+ years for some of the biggest suppliers, including iconic brands such as Wheel of Fortune, Classic Batman, Sex in the City, Brittney Spears, Game of Thrones, the Adam’s Family and the list goes on.  When asked why branded slots have been appealing to the masses for so many years without boredom, Kaminkow explained with a simple analogy.

“Everyone has their own segmentation of what they’re interested in, so you can’t make something for everyone any longer”, he added.

“Its a global program and we basically encourage employees from around the world to submit innovative ideas that wouldn’t be business as usual”, shared Coppola.

“This year we had 500 employees submit ideas from 9 countries around the world- tremendous participation- we had shark tank-like pitch days in three different countries and of those 500 who submitted ideas, 70 were selected to pitch, of those 70 who pitched their ideas, 15 of them were fully funded to concept.  We’re showing three here at G2E, the remaining 12 will be done by the end of the year”, he added.

One of the greatest challenges with innovating in huge companies such as Aristocrat- or any company for that matter- is how to manage day-to-day responsibilities while trying to create something new.  Coppola explained how his thinkBIGGER program accounts for this issue and it all depends on who submits the idea, he said.

If its a game designer who comes up with a new game, for example, Aristocrat will back-fill their position so the employee can work on the new game full-time.  If its someone in HR who comes up with a new app, for example, Aristocrat will find someone who can bring the idea to life while the employee with the original idea is invited to oversee the project.

“The response from the operators who have been covering our booth and who have been checking out our games has been overwhelming.  We have a virtual reality product, we have an augmented reality product and they’re really receptive to that.  Not only the fact that we’re doing these types of concepts, but the fact that this program exists and is encouraging innovation throughout the company and the industry, there is a tremendous response to that as well”, Coppola shared.

Continuing on with the theme of video game gambling at G2E 2017, we came across the Gamblit stand today, a stand that is honestly three times the size it was last year.  Gamblit Gaming’s Marcus Yoder, VP of Regulated Markets Business Development, was on hand to speak with CalvinAyre.com- Pac-man suit and all- to discuss Gamblit’s latest Pac-man video gambling game.

“While another manufacturer has a license to use Pac-man symbols in a slot game, we have the license for the actual Pac-man game”, explained Yoder.

“The first game is called ‘Battle Casino Pac-man’ and its competitive Pac-mans, so basically you play through the game and as you get a power-up, you turn into the giant Pac-man and you go and you eat your competitors.  So the last man standing wins the pot that was generated by the bets”, he added.

Unsurprisingly, the reception of Gamblit’s “gamblified” version of Pac-man has been a hit with delegates at G2E and the company’s original mantra of “gamification” on casino floors has truly taken off.

“The key aspect is we made these [games] for younger players and 65% of our game players are 21-39, so those are not your slot players”, he added.