Problem gambling on the decline in Germany 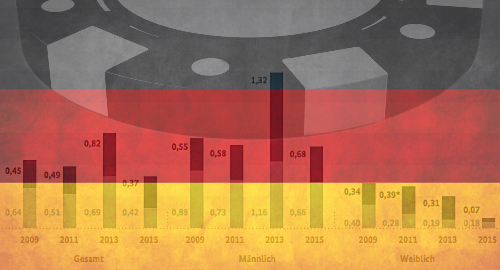 Problem gambling is on the decline in Germany, according to the findings of a new national addiction study.

Monday saw the release of the Drug and Addiction Report 2017, an every-other-year project of Germany’s Drug Commissioner of the Federal Government. The report primarily addresses intoxicants, but there is a five-page section (starting on page 67) that directly addresses gambling issues.

The survey queried some 11,500 respondents, of which 37.3% copped to having engaging in some form of gambling activity at least once in the previous 12 months. This is down from 40.2% in the most recent report, and down significantly from the 55% who answered ‘yes’ to that question in 2007.

Those who admitted to gambling were asked a series of 20 questions regarding their gambling activity. Answering ‘yes’ to three or four of these questions was sufficient to earn a respondent the status of ‘problem gambler’ while answering in the affirmative to five questions or more resulted in a more serious ‘pathological gambler’ designation.

The headline gambling finding of the 2017 report (which actually covers responses submitted in 2015) is that 0.42% of respondents were classified as problem gamblers while a further 0.37% were deemed to be more severe pathological gamblers. These figures are down significantly from 0.69% and 0.82%, respectively, in the 2013 report.

That 2013 report was something of an aberration, as the numbers had until that point been mostly trending downward or standing pat. Problem gambling rates went from 0.64% in 2009 to 0.51% in 2011, while pathological rates increased slightly from 0.45% to 0.49%. So the 2015 figures represent something of a return to form, with the numbers in both categories continuing to trend lower.

The 2015 numbers were skewed by a sharp drop in female pathological gambling rates, which fell from 0.31% to just 0.07%, while problem gambling rates among women were basically flat.

The survey doesn’t delve into what types of gambling each respondent preferred, nor does it break down gambling activity by age, socio-economic or other demographics. It also doesn’t offer an explanation for why the 2013 numbers featured such an aberrant spike in gambling activity.

Regardless, the survey’s results are a welcome change from the recent study of the UK market that showed a modest uptick in problem gambling activity (although still well within statistical norms), as well as from the endless cycle of hyperbolic gambling = evil stories being churned out by the UK media in recent months.