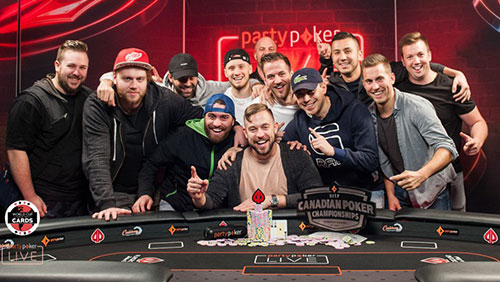 partypoker LIVE continues to take over the world of live tournaments with the crowning of a millionaire in Sochi, a victor in the Canadian Poker Championships, and a partnership with the World Series of Poker in Uruguay.

It’s not hard to see how partypoker LIVE are whipping up a storm. Offer massive guarantees, turn the winner into a millionaire, and the poker community will head in that direction.

But didn’t the World Poker Tour (WPT) used to offer massive guarantees, and turn their winners into millionaires.

Why did they stop?

Answers on a postcard, please.

The latest millionaire is no ordinary grunt.

Aleksandr Gofman outlasted a field of 999 entrants to capture the $1m first prize, after beating the Spaniard David Laka in heads-up action. There was a pay jump of $400,000 between first and second. There was no deal. That’s two confident lads, right there.

We’ll get to Laka in a minute.

Gofman came into this event with over a million bucks on his Hendon Mob CV. He 9,once won a Russian Poker Tour (RPT) event. He has made the final table of two World Series of Poker (WSOP) events, regularly brings home the top dollars in the Merit Crystal Cove Hotel & Casino in Kyrenia, and most recently finished 3/3542 in the WPT500 at the Aria in the summer.

Gofman began with a 2:1 chip deficit.

Laka didn’t have a sniff. 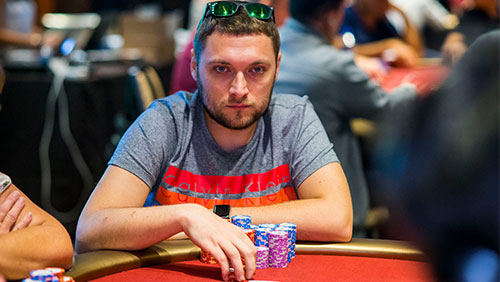 aid in this one.

Other stars of the felt that went deep in this one included Vladimir Troyanovskiy (12th), Paul Jackson (27th), and Konstantin Puchkov (33rd).

Here is the final table of the High Roller.

Notice the name of a particular casino owner from Rozvadov?

The partypoker team had to split in half this week, with one set of employees in Russia, and the other in Canada for the partypoker LIVE Canadian Poker Championships.

The $2,200 buy-in CAD$2m guaranteed event attracted 899 entrants, meaning partypoker missed the guarantee by CAD$52,000. The final table was mighty fine with the irrepressible Mike Leah making an appearance, and Patrick Serda entering the final table on the back of an unbelievable story. Serda had to multi-table online/live on Day 2 because he was busy winning the $10,000 World Championship of Online Poker (WCOOP) High Roller on PokerStars for $470,000. Serda finished seventh at the final table, and Leah’s attempt to win ended in fourth.

The heads-up encounter was between Rivest and Daren Keyes. The pair cut a heads-up deal that saw Rivest bank $280,325, and Keyes $303,675, with $56k for the winner, an amount that ultimately went to Rivest.

Rivest doesn’t have a long track record of finishing deep in live events, but he did finish 15th in the partypoker MILLION North America

Other illustrious poker stars who delved deep in this one were Ema Zajmovic (11th), Chanracy Khun (13th), and Kyle Bowker (21st).

partypoker Partner With WSOP in Uruguay

partypoker has strengthened their bond with the WSOP after agreeing to sponsor the World Series of Poker Circuit (WSOPC) event in Uruguay later this year.

partypoker open up the online satellite tables on Sunday, where you can qualify for as little as $1.10.

In July, partypoker announced plans to partner with the WSOP for the first time at WSOPC Brazil, Sep 27.