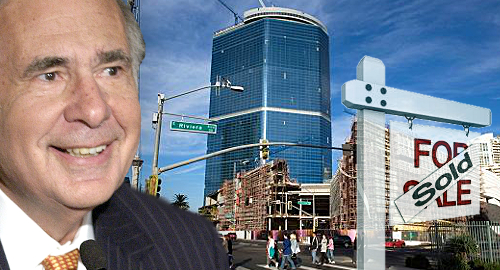 Billionaire investor Carl Icahn has unloaded the unfinished Fontainebleau casino-hotel in Las Vegas for more than four times what he paid for it seven years ago.

Rumors had been circulating for days, but Tuesday brought confirmation that Icahn Enterprises L.P. had sold the Fontainebleau for $600m to an affiliate of development and investment firm The Witkoff Group LLC, and New Valley LLC, the real estate arm of Florida-based holding company the Vector Group.

While the price is slightly less than Icahn had been seeking for the Fontainebleau, Icahn couldn’t help crowing a little, saying his group had acquired the property “when others were unwilling to invest.” Icahn called the $457m profit was “an example of our ‘contrarian’ modus operandi,” the aim of which is to seek out distressed properties, add a coat of paint and some new shingles, “and ultimately sell them for large gains.”

The Fontainebleau deal certainly looks better than Icahn’s sale of the Trump Taj Mahal casino in Atlantic City. Icahn rescued the Taj from bankruptcy in 2015 but cash injections couldn’t buy him any love from the property’s unionized workforce, and a frustrated Icahn sold the property to Hard Rock International this April. Tellingly, the sale price went undisclosed, suggesting Icahn was just happy to wash his hands of the Taj before losing any more.

New York developer Steven Witkoff issued his own statement calling the “significantly undervalued” Fontainebleau “one of the best physical assets in the country” and his group planned to “unlock its true growth potential.” Other than that, Witkoff was mum on his group’s future plans for the unfinished 4k-room hotel-casino complex sitting on 27 acres of land on the north end of the Vegas Strip.