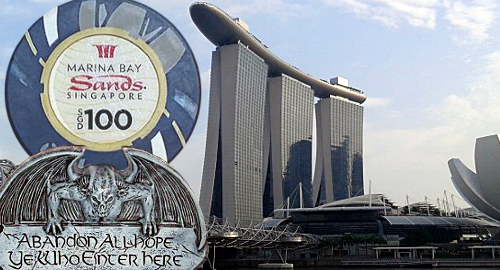 Casino operator Las Vegas Sands saw its revenue top $3b in the second quarter of 2017, thanks in part to a luckier than usual VIP performance at its Singapore operations.

Sands China’s operations in Macau remain the company’s main breadwinner, posting revenue of $1.82b, up 23% year-on-year, while net income was up 37.6% to $326m. The strong performance comes just as Sands China’s debut property, the Venetian Macao, prepares to celebrate its tenth anniversary on August 28.

Despite Macau’s resurgent VIP market, most of Sands China’s properties reported lower VIP turnover numbers, most notably at the Venetian, where rolling chip turnover was down nearly one-quarter. However, VIP win rate was up nearly across the board, again, particularly at the Venetian, where win rose 0.88 points to 3.61%, comfortably above the expected 3.0-3.3% range.

The Parisian Macao, which opened last September, generated total revenue of $322m, up 15.4% from Q1, while adjusted earnings rose nearly 30% to $106m. The property’s VIP turnover was flat quarter-on-quarter, but win soared over a full point to 3.89%.

Speaking to analysts on the post-earnings call, Sands President Rob Goldstein noted that Singapore’s VIP market was historically incredibly volatile, and that the fortunes of a couple dozen players can easily make or break the quarterly VIP numbers. Goldstein admitted that MBS had played lucky in Q2, likely to the tune of an extra $100m in the bank.

In Las Vegas, revenue improved nearly 8% to $384m and adjusted earnings rose nearly 10% to $79m. The gains came despite declines in both table drop and slot handle, as win rates for both improved. Revenue at Sands Bethlehem in Pennsylvania was flat at $147m.