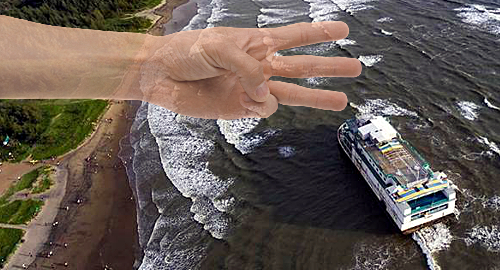 Goa’s floating casinos will be moved onshore within three years and locals won’t be allowed inside, according to the Indian state’s chief minister.

On Monday, Chief Minister Manohar Parrikar informed the state legislative assembly that the five shipboard casinos currently offering gambling services on the Mandovi river will all be moved to a land-based “special entertainment zone” within the next three years.

Responding to questions from opposition MLAs, Parrikar said his government was formulating a new gaming policy that would eliminate language referring to casino “vessels,” thus ensuring that the floating casinos “will cease to exist.”

Furthermore, Parrikar stated that the new policy would impose a hard cap on the number of existing floating casinos at five. A sixth casino, the MV Lucky 7 (pictured), ran aground last weekend while being towed to its permanent mooring point on the Mandovi.

Efforts are still being made to dislodge the ship from the sandbar on which it’s resting, but Parrikar said the ship will “never enter the Mandovi.” Parrikar said the sixth casino “can go somewhere else and can operate only if people of the area don’t have a problem.”

That statement will likely doom the MV Lucky 7’s future, as Goa’s government has been trying for years now to find an alternate waterway for the casinos to occupy, but local opposition has doomed every potential location. It will also likely prompt the ship’s owner, Golden Globe Hotels Pvt Ltd, to file a legal claim for compensation.

Regardless, in three years time, all floating casinos will have to move onshore, and Parrikar said KPMG consultants had been tasked with identifying the future home of this new entertainment zone. The government plans to amend the 2012 Prevention of Gambling Act to ensure local residents will be prohibited from entering the entertainment zone’s gaming venues. Parrikar noted that he’d spearheaded a ban on locals in casinos but “the legislation never came into force.”

Parrikar couldn’t resist deflecting some of the opposition’s criticism back at the Congress party, under whose watch the floating casinos were approved in the first place. Parrikar said Congress had served his BJP government “a fait accompli” that tied his hands on responding to gaming concerns. “When any person invests money, a state has a responsibility for continuity, right or wrong.”

In addition to the five floating casinos, there are nine land-based venues in the state, most of which operate out of luxury hotels that cater to out-of-state tourists. In a written reply to the legislative assembly last week, Parrikar defended the gaming industry as having boosted government tax coffers and the local economy while having no negative impact on local crime rates.