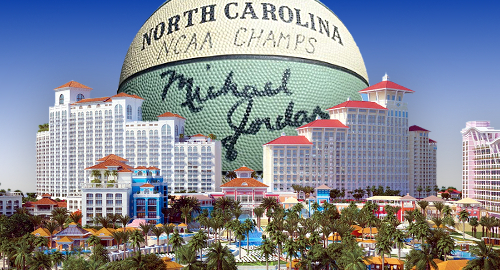 The Baha Mar resort casino in the Bahamas is filling over half its available hotel rooms, three months after the troubled project’s soft opening.

On Tuesday, Prime Minister Hubert Minnis and some of his cabinet members toured the $4.2b Baha Mar resort, while Chow Tai Fook Enterprises (CTFE) Bahamas President Graeme Davis touted the fact that the resort is currently at “over 50% occupancy” of the 1,800 rooms at the property’s Grand Hyatt hotel.

Davis called this an “excellent” result given the relatively brief time that the resort has been open to the public and the fact that CTFE has yet to ramp up its marketing campaign. Baha Mar expects to open the resort’s second hotel, the 300-room SLS Lux, in late October or early November, with a 200-room Rosewood hotel following next spring.

Davis claimed the SLS was on track to meet its opening target, noting that “all of our furniture is here.” That conflicts with claims made by Baha Mar’s primary contractor, China Construction America (CCA), in a lawsuit filed against a US supplier that is refusing to deliver 1,420 lounge chairs until it receives proper payment.

The 1,420 chairs represent the second half of the order the Florida-based Source Outdoor was contracted to deliver before Baha Mar’s original developer filed for Chapter 11 bankruptcy. Source Outdoor told a Florida federal judge that CCA had originally promised to pay the company the money it was owed for the chairs, but then reneged, claiming the debts weren’t its responsibility.

CCA has a deal with the Bahamian government to ‘substantially’ complete Baha Mar by October 15, and failure to do so exposes the company to fines of up to $250k per day until the job is done. Critics have questioned CCA’s claim that having to find new chairs threatens the contractor’s ability to meet its October deadline.

Last week, the Florida judge overseeing the case also cast shade on CCA’s claim that it would suffer “irreparable harm” via Source Outdoor’s refusal to hand over the rest of the chairs without full payment. Source Outdoor’s CEO Gerald Shavartsman agreed, saying there was noting “peculiar or unique” about the chaise lounges in question, yet CCA was treating them like were on par with “a Monet or a Picasso” or “a basketball signed by Michael Jordan.”

Shavartsman echoed other observers’ suspicions that the chair dispute is a smokescreen intended to provide CCA with an excuse for missing yet another deadline. The Bahamas Tribune quoted Shavartsan’s court filing noting that ”nowhere does CCA’s affidavit indicate that CCA is otherwise on schedule for timely completion.”

In a new filing with the court this week, CCA claimed Source Outdoor “misappropriated” the funds it received from CCA by applying these to the debts owed by Baha Mar’s bankrupt developer. CCA also claims that the chairs in question were “made to order for the Baha Mar project,” and thus Source Outdoor is the only source that can provide matching items.