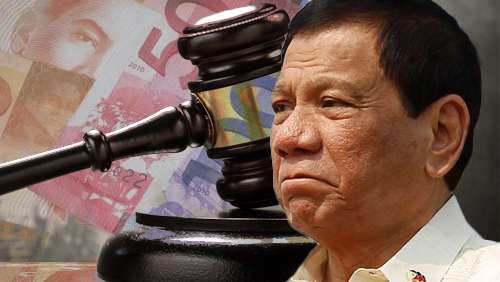 The Philippines will no longer sweep dirty cash from casinos under the carpet after President Rodrigo Duterte signed the country’s newly improved Anti-Money Laundering Law.

With the new law, which extends its reach to casinos including internet- and ship-based operations, transactions worth PHP5 million (US$100,000) must be reported to the Anti-Money Laundering Council (AMLC). The threshold for non-gaming ‘covered persons’ is set at just PHP500,000 (US$10,000).

The Philippines already had an existing anti-money laundering law but it was placed under international scrutiny as a result of the 2016 Bangladeshi bank heist – in which U$81 million of stolen cash was funneled through the Philippine gaming industry.

Philippine Central Bank Governor Nestor A. Espenilla Jr. welcomed the announcement made by the Office of the President, saying the new law will “plug a critical gap in our legal framework.”

“It will significantly strengthen our ability to prevent the entry of illicit money into our economy,” he said, according to the Philippine Daily Inquirer.

Espenilla, who chairs the AMLC, said the agency will soon buckle down to discuss implementing the rules and regulations (IRR) of the newly signed law.

The central bank governor announced that the AMLC Secretariat will beef up its manpower in order to cope with the additional responsibility.

Espenilla said the council targets to make the IRR available by the year-end at the latest. He assured everyone that the IRR will be fast tracked in order to meet the deadline.

“The IRR will be developed in coordination with casino operators, notably Pagcor,” Espenilla added, referring to state-run Philippine Amusement and Gaming Corp.

The new law has so far garnered mixed reception from both casino operators and financial regulators. Philippines Securities and Exchange Commission chairperson Teresita Herbosa had been pushing for a threshold that is much lower than PHP5 million (U$100,000).

Her views, however, were in contrast with that of casino operators who have thrown their support behind the new law.