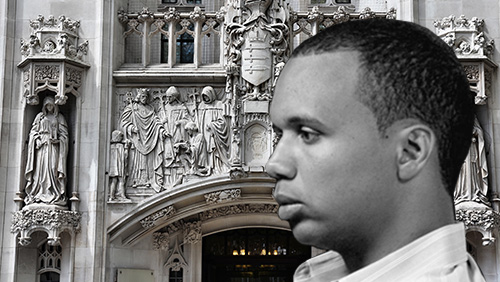 Phil Ivey begins his last ditch attempt to salvage £7.7m in lost Punto Banco winnings as he takes his case against Genting Casino to the UK Supreme Court.

Robin Hood, Lords, Ladies…are not the common words you expect to see chained to Phil Ivey in a sentence, but that’s what’s happened this week, as Ivey had his £7.7m date with destiny in the UK Supreme Court.

Ivey, who has been inconspicuous by his absence at the World Series of Poker (WSOP), decided against a trip to London. Instead,  Lord Neuberger, Lady Hale, Lord Kerr, Lord Hughes, and Lord Thomas, squared up against Ivey’s legal counsel: Richard Spearman QC.

The UK Supreme Court donned their superhero costumes after Ivey, and his legal team failed twice to prove Ivey and his buddy Cheung Yin Sun’s innocence. The pair used ‘edge sorting’ techniques to win £7.713.650.60 playing a derivative of Baccarat known as Punto Banco across 20 & 21 August 2012, at Crockford’s Casino in Mayfair, London.

The casino promised to wire the money to Ivey, but by the time he had gotten home and checked his piggy bank, found they had only returned his £1m investment.

Ivey sued the casino, and Judge John Mitting ruled that although Ivey was not a dishonest individual, edge sorting was illegal under civil law. Ivey took the case to the Court of Appeals where again, they agreed that Ivey was a lovely man and all that, but voted 2:1 in favour of the casino, because of the intentional way Ivey and his partner in crime shifted the 1% casino edge to a 6% Ivey edge.

The Battle of the Dictionaries

Representatives of both sides gave their arguments to the Supreme Court on Thursday. Team Ivey focused on both the previous courts finding that Ivey had not been dishonest. They blew the dust off the cover of a 1989 Oxford English Dictionary where it defines cheating as (‘to deal fraudulently, practice deceit’). Crockford’s barristers relied on the Concise Oxford English Dictionary version (‘to act dishonestly or unfairly to gain an advantage’).

“There is no finding at all that Mr Ivey was dishonest in any sense,” Mr Spearman told the court. “He was found to be an honest witness who didn’t believe what he was doing was dishonest.”

Speaking at an earlier hearing, Ivey said: “When I walk in the doors I look at every mathematical advantage I can to win. I found something we thought would work in casinos, that we could have an advantage over the house and make money. That is why I came to Crockfords.”

Crockford’s legal representative, Christopher Pymont QC, called the argument that Ivey was a goody-two shoes looking to take on the big bad wolf of the casino, nothing more than a ‘Robin Hood defence.’

‘It does not follow that just because he genuinely believed he was not a cheat he did not appreciate that what he was doing would be regarded as dishonesty by ordinary honest people,” said Pymont. “’The key to cheating is not whether the player acted dishonestly but whether he acted deliberately to gain an unfair advantage in the game.

It’s not only Crockford’s who are rather upset with Mr Ivey. The Borgata Hotel Casino & Spa, in Atlantic City, successfully sued him for $10.1m in Baccarat winnings earned in the same controversial fashion. Ivey is taking the case to the U.S. Third Circuit Court of Appeal.

All told, if both cases go the way of previous rounds, Ivey could be looking at a $20m hole, and not even a berth in the Poker Hall of Fame will soften that blow.