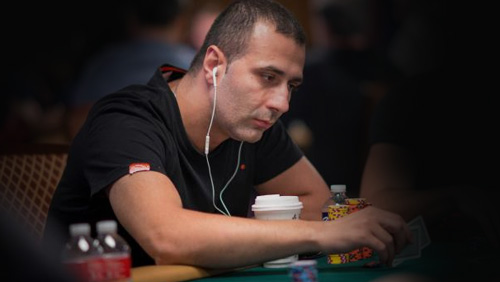 A round-up of the final flight of Day 2 of the World Series of Poker Main Event including exits for Chris Ferguson, Daniel Negreanu, and William Kassouf.

Day 2c of the World Series of Poker (WSOP) Main Event finished similarly to Day 2b, after a British player, competing in the event for the first time, finished on top of the chip counts.

When it comes to grand names in poker, Artan Dedusha, is more of a pocket knife than a full blown machete, but he managed to cut through the thick foliage of Day 2c to clamber to the spot with the best view.

Dedusha comes into the Main Event in fine form after winning a Grosvenor 25/25 Series event in London for £25,421. It’s not the kind of money he is hoping to bank in the Main Event, but it’s the heat that’s the most important thing.

Amongst those that flew into Day 3 in perfect formation were poker’s version of Parenthood Jason and Natasha Mercier. The reigning WSOP Player of the Year (POY) ended the day with 101,800, and Mrs Mercier (and baby bump) made the Top 10 chip counts with 476,800.

Other notables that made through to Day 3 included:

Daniel Negreanu, Michael “The Grinder’ Mizrachi, Antonio Esfandiari, and the seven-time bracelet winner, Men ‘The Master’ Nguyen, crashed into the rail like a group of vintage military planes minus a propeller.  And so did the star/pest of the 2016 WSOP, William Kassouf.

Eight former WSOP Champions entered Day 2c. Half of them will have to wait for another 12-months for a shot at glory; the other half will take their heart palpitations with them into Day 3.

Ryan Riess (2103) and Joe McKeehen (2015) were made to eat dirt. The most decorated player in WSOP history, Phil Hellmuth (1989) saw his poor WSOP fizzle out to nothing, and the poker world will be spared a 2017 WSOP POY award heading to Chris Ferguson after the 2000 champ failed to add to his POY score with an early exit.