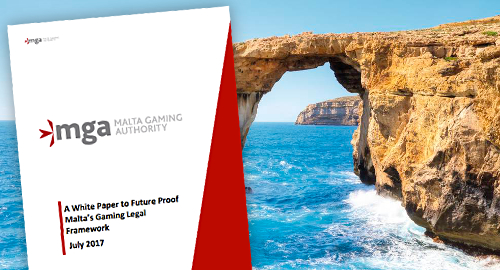 This week, the Malta Gaming Authority (MGA) published a White Paper intended to ‘Future Proof’ the nation’s gambling industry. The primary goal is to replace Malta’s current gambling legislation with a new Gaming Act that will (hopefully) reduce “unnecessary regulatory burdens” while allowing the MGA to strengthen supervision “on the areas which present a higher risk profile.”

Among the White Paper’s proposed changes are replacing the current multi-tiered license system with a system encompassing just two types of licenses: business-to-consumer (B2C) and business-to-business (B2B). License duration would be doubled to 10 years from the current five.

The MGA is proposing to streamline taxation into “one flow with two main layers,” while B2B licensees would be exempted from gaming tax in a bid to boost Malta’s appeal as the hub for online gambling service providers.

The MGA also intends to move towards “an objective-based rather than excessively prescriptive regulatory approach” to foster innovation while still ensuring that regulatory objectives are met. At the same time, the MGA plans to broaden its regulatory scope to “allow for intervention where necessary and in a proportionate manner.”

The MGA says it will strengthen supervision of operators “deemed to present a higher risk profile,” although the criteria for earning a higher risk profile remain unclear. The MGA plans to introduce “the concept of administration” to protect operations “in distress,” which includes assisting in winding down such operations to better protect jobs and player funds.

The MGA also confirmed that it remains “committed to allow the use of crypto-currencies by its licensees in the immediate future.” The MGA previously viewed crypto-currencies such as Bitcoin with some skepticism but now recognizes that the rise of virtual currencies is “inevitable.” The MGA says it will detail the main findings of a study on a proposed framework for implementation of a commensurate framework in Q4 2017.