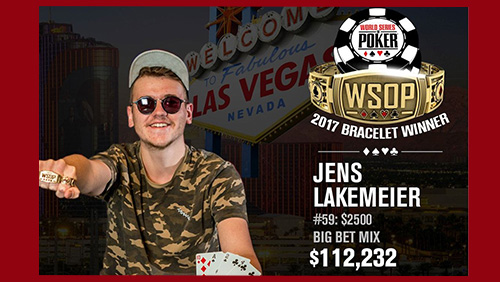 A short and sweet World Series of Poker round-up congratulating the Germans for winning their first bracelet of the summer courtesy of Jens Lakemeier, the Crazy Eights event drags in crazy numbers, and the Poker Player Championship begins.

I know what you’ve been thinking these past three weeks – why haven’t the Germans been skinning everyone alive?

Typically, this time of year, about ten of them step onto the steaming hot tarmac of McCarron Airport secretly divvying up how many bracelets, and how much money they are going to win, but it hasn’t turned out like that.

Christoph Vogelsang took down the Super High Roller Bowl for $6m, but instead of German poker players swarming all over the Rio like the enchanted broomsticks in Fantasia, they appear like sheet music scattered by the billows of the Rio air con unit.

And then, along came Jens Lakemeier, who at 23-years of age, has won the first bracelet for Germany in Event #59: $2,500 Big Bet Mix. I would like to give you a sense of how Lakemeier is feeling after his win, but he decided to switch on the Dan Colman radio silence no sooner had he smiled for the mandatory winner’s snapshot.

Lakemeier breezed through this final table like a Japanese express train, eliminating the final quintet in 20-minutes flat. Those who felt the brunt force trauma of the German included Andrew Kelsall (making his third final table), Jerry Wong (his second), and Jason Stockfish (who now has two runner-up finishes, after finishing second in the $565 Pot-Limit Omaha).

It was a brand new event. I am not sure we will see it again. Only 179 players were interested. Lakemeier earned $112,232 for the win, the second largest score of his career. He was making his second WSOP final table appearance, after finishing sixth in the €2,200 Mixed Event at the World Series of Poker Europe (WSOPE) in Berlin, back in 2015.

Other players who went deeper than an ant plopped into a bowl of sand was the two-time bracelet winner, Marco Johnson (8th), and WSOP Player of the Year interested parties Mike Matusow (11th) and Daniel Negreanu (12th).

Event #60: $888 Crazy Eights No-Limit Hold’em 8-Handed event has breezed through four starting flights and is about to hit the rather serious middle part of things. The event has pulled in 8,120 entrants, making it another phenomenal success.

And the tournament that defines the card-for-card best poker player in the world has begun. Event 62: $50,000 Poker Player’s Championship attracted 93 entrants, with the gate still open until the beginning of Day 2.  The leader is the former winner, Matt Ashton, who has been spending most of his time stuck in the middle of bouncers and big guys trying to bash each other’s brains out in Bobby’s Room.