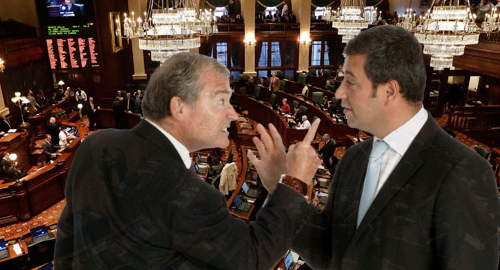 Online gambling legalization hopes are fading in Illinois as the clock counts down to the end of the current legislative session.

The Illinois state senate stunned observers on the last day of May by approving online casino, poker and daily fantasy sports legislation with little advance notice. With a full month to go before the legislature adjourned for the summer, all that was needed was a similar vote in the state House and Gov. Bruce Rauner’s signature.

And then, nothing. The House Executive Committee eventually scheduled a meeting for last Saturday to discuss the issue, then rescheduled for Tuesday, then rescheduled again for Wednesday. But the Wednesday hearing came and went without debate or votes on either online gambling or DFS.

Poker Players Alliance exec John Pappas was in attendance at Wednesday’s hearing, but Pappas poured a big bucket of cold water over the state’s online gamblers by tweeting that the “wheels have come off” the online gambling and DFS bills. “Folks are regrouping and may try this again in a few weeks.”

The legislature has only until Friday to deliver a budget for the coming fiscal year, although Gov. Rauner has now threatened to extend the session until legislators deliver something he can sign. Legislators have already gone two fiscal years without delivering a budget and ratings agencies are threatening to downgrade the state’s debt to junk status if this latest impasse isn’t resolved.

The state’s finances are in such a mess that the Illinois Lottery announced it would suspend PowerBall ticket sales as of Wednesday evening and the MegaMillions is set to follow suit on Friday. Lottery officials have warned that the two multi-state lotteries could ultimately choose to drop Illinois entirely based on its unreliability and uncertain future.

The Senate’s bill set online gambling license fees at $10m, credited against future tax obligations, which could mean an upfront boost to the state’s revenue column. That said, the fees raised would be a mere drop in a budget that’s currently staring at a $6b deficit, and besides, recognizing low-hanging revenue fruit is something that no other US state legislature has done in the four years since New Jersey launched its intrastate online gambling market, so why should Illinois be any different?